5 Lawn Alternatives for Dealing with the California Drought

5 Lawn Alternatives for Dealing with the California Drought

With most of California facing extreme to exceptional drought conditions, the parched land is giving a whole new meaning to the nickname “golden state”. Golden lawns are becoming the new normal as folks take drastic measures to conserve water. But you don’t have to settle for crunchy brown grass. There are several excellent alternatives to traditional lawn that don’t require much, if any, irrigation once established. While they might have a slightly different look than what you’re used to, in time most people come to appreciate their unique style. 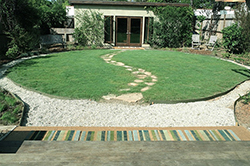 Buffalograss is native to the Great Plains region and one of the few native grasses that can be used for turf. Unlike our traditional cool-season Kentucky bluegrass, buffalograss is a warm-season grass. This means it thrives during the hottest times of the year when other grasses want to go dormant. It loves heat and remains green with little irrigation (1/4 to 1/2 inch a week). On top of its outstanding water efficiency, this species is much slower growing than other lawn grasses. This in turn cuts back on the maintenance involved in mowing, trimming, and fertilizing. In fact, buffalograss will actually fail if over-managed. In California, buffalograss performs best in the southern half of the state. 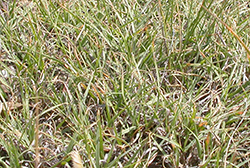 Blue grama is becoming another attractive option for alternative lawns. Like buffalograss, blue grama is a warm-season native grass from the Great Plains. While buffalograss performs best in clay soils, blue grama prefers more sandy soils and is sometimes mixed with buffalograss in low-maintenance turf blends. Blue grama grass doesn’t require any irrigation once established, but a little bit of water (1/4 to 1/2 inch week) is beneficial to keep it looking its best. If left unmowed it forms unique eyebrow-shaped seed heads that are quite visually appealing. Like other warm-season grasses, blue grama should be planted in the late spring or early summer and does best in areas of southern California. 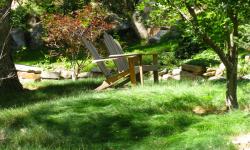 For a cool-season option that can be used throughout the entire state of California, sheep fescue is an excellent choice for an alternative lawn. Like the two previously mentioned grasses, sheep fescue is water-efficient and mowing-optional. However, unlike buffalo and blue grama, sheep fescue is a cool-season grass and will green up much quicker in the spring and stay green longer into the fall. Sheep fescue is very tolerant of temperature extremes and only requires around 10 inches of annual precipitation. This means that it can be grown without supplemental irrigation in most places around the country. 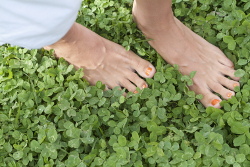 For a totally different take on the great American lawn, why not try ditching grass altogether? White clover lawns have become quite popular lately in California, and for good reason. Clover requires less water than grass, tolerates poorer soils better than grass, needs no fertilizer and is naturally low-growing. When allowed to bloom, white clover provides an excellent forage source for honey bees and other pollinators. Need any more reasons why you should consider a clover lawn? Here’s one for pet owners—clover is unaffected by dog urine.

Perhaps one of the more unique lawn alternatives out there, yarrow is a perennial herb that forms a thick green mat of fine, feathery foliage. This tough, drought-tolerant herb can be mowed regularly to resemble a traditional lawn or left unmowed. When left unmowed, yarrow will send out tall white flowers. Yarrow thrives in most areas of California, and once established needs no irrigation. It’s also fairly traffic tolerant and doesn’t need to be fertilized. For a thick lawn look, ½ pound of seed per 1000 sq. ft. is sufficient. Mowing it regularly at a height of 1 ½ - 2 inches will prevent the base of the plants from becoming woody. Please contact us for price quotes when purchasing yarrow seed by the pound.