A Green, Spongy Menace: Dealing With Moss in Your Lawn

A Green, Spongy Menace: Dealing With Moss in Your Lawn

Last week I received a desperate email from a homeowner in northern Idaho who was just about ready to give up on her landscape. She explained how her lawn had literally been taken over by moss. And it wasn’t the first time either. Two years ago she had all the existing grass and moss physically removed, no doubt a very labor intensive process. After filling in the area with new soil and reseeding she thought that would be the end of it. However, after deciding to do a little spring cleanup in her yard last week she noticed the moss had returned, this time with a vengeance. Sadly, this isn’t the first email I’ve received describing an epic battle with moss. So what can homeowners do to finally win the war on this green, spongy menace?

First we must understand that a moss problem is generally the result of environmental conditions, something largely out of our control. Treating the symptoms (physically removing the moss or applying chemicals) might solve the problem for a while, but it will eventually return. To truly eliminate the problem we need to find out why the moss is there and alter it. While we can’t change the laws of nature there are some things we can do to improve the conditions of our yards to make them less appealing for moss growth. 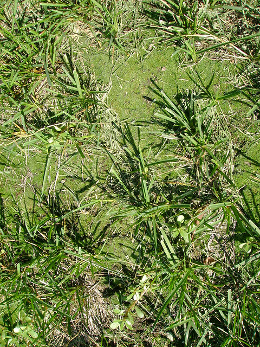 Shade is perhaps the biggest factor to overcome in the battle with moss. Every moss problem I’ve dealt with was always in a heavily shaded area. This can also be the most difficult factor to alter since it’s hard, if not impossible, to remove the causes of shade in your yard. First, make sure you’re using the most shade-tolerant grass species available for your climate. Fine fescue is the best choice for heavy shade. If the area is extremely shady (receiving less than four hours of direct sunlight a day) and the shade cannot be altered by trimming or pruning trees, hedges, etc., perhaps something else besides grass would be better suited for that particular area. There are many ornamental plants and shrubs that thrive in full-shade and will prevent moss from building up.

The second biggest hurdle in the fight against moss is damp, soggy areas. Moss loves these spots and unless you can improve the drainage in that area, you’re fighting a losing battle. Fortunately this is easier to correct than shade. Regular core aeration is the best way to improve drainage, fix compaction and ensure your soil is getting enough oxygen. Dethatching when the thatch layer has become thicker than ½ inch will also help. In extremely wet areas that have trouble draining it may be necessary to install subsurface drain lines. On the other hand, soils that are allowed to completely dry out during the summer become the perfect place for moss spores to hide out. Once moisture returns in the fall, drought-stressed areas often become overrun with moss. 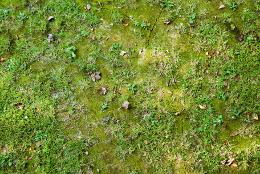 Also be aware of the nutrient needs of your lawn. Moss thrives in nutrient-poor soils where grass has become thin and unhealthy. Make sure your lawn receives adequate fertilizer. You can also supercharge your existing grass by mixing in white Dutch clover. Clover is a natural source of fertilizer, adding nitrogen to the soil and invigorating the grass around it. Not only can it improve soil fertility, clover can also thicken bare and thinning areas in your lawn and keep moss from getting out of control. You should also conduct soil tests to assess your soil pH. Acidic soils are more likely to suffer from moss outbreaks.