Arrowleaf Balsamroot: Sunflower of the West

Arrowleaf Balsamroot: Sunflower of the West

There’s nothing quite like hiking in the West. From the Rocky Mountains to the Cascades, from British Columbia down into Arizona, western North America has some of the most scenic hiking trails in the world. For wildflower lovers the West is a treasure trove of species. One of those treasures is our native arrowleaf balsamroot (Balsamorhiza sagittata). Its bright, cheerful flowers seem to transform mountain meadows into seas of yellow during the spring and summer months. But there’s more to arrowleaf balsamroot than meets the eye. On top of its ornamental qualities, arrowleaf balsamroot has value medicinally as well as being an important forage plant for livestock and wildlife.

According to the Montana Native Plant Society, arrowleaf balsamroot was first collected during the Lewis and Clark expedition in 1806. During the return trip William Clark discovered the wildflower growing along the Columbia River. He observed how the natives used it as food, eating the stem without any preparation. In Clark’s journal he refers to his newly discovered plant as a “sunflower”; not surprising considering their similarities. Even today another common name for arrowleaf balsamroot is the Oregon sunflower. The original specimens collected by Clark during the expedition can be found in the Lewis & Clark Herbarium in Philadelphia. 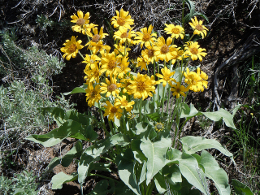 Long before the arrival of Lewis and Clark, arrowleaf balsamroot was being used for food and medicine by the American Indians. All parts of the plant are edible. Leaves were eaten raw, boiled or steamed. The long taproot was steamed or roasted and was often ground into meal or used as a coffee substitute. The seeds, similar to those of the sunflower, were roasted and pounded into meal. As a medicinal plant arrowleaf balsamroot helped relieve the pain of burns, wounds and bruises. The root was made into a tea and used to treat tuberculosis and whooping cough. The Cheyenne tribe steamed the entire plant and inhaled the vapors to cure stomach pain and headaches.

Nowadays, arrowleaf balsamroot is grown for its ornamental qualities in landscapes around the West. Gardeners enjoy the native perennial’s sunflower-like appearance and interesting arrow-shaped leaves. Arrowleaf balsamroot can get up to two feet tall and forms a taproot that can reach depths of six feet. This makes it a very drought tolerant plant and a great addition to water-wise landscapes. The taproot itself has a very pleasant balsam-like odor, giving the wildflower its name. On top of its drought tolerance, arrowleaf balsamroot is very winter-hardy and able to handle part-shade. It does take a while to fully establish and mature, often requiring three or four years to produce flowers.

Wildlife and Livestock Use 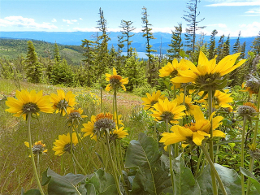 Look for arrowleaf balsamroot in our Great Basin Wildflower Blend, or contact us directly to purchase it in bulk.