As a young boy I remember playing in the fields and woods surrounding my rural home. Like all children probably do at some point, I recall picking wildflowers to give to my mom. These floral “masterpieces” contained whatever I happened to find in the fields and meadows that day. Dandelions, purple alfalfa blossoms, sunflowers, field bindweed flowers and even the occasional wild geranium were all fair game. But occasionally my arrangements contained an extravagant collection of baby blue flowers that I found growing alongside the roads during the summer months. It was only later in life I discovered this blue-flowered weed was called chicory, and it’s much more than just a mere weed.

Chicory (Cichorium intybus) is a broad-leaf perennial member of the sunflower family introduced to the United States in the 1700s. In its native European countries chicory has been used as a coffee substitute and additive for centuries. It continued to be used for this purpose during the Civil War and was often drunk by Confederate soldiers. Even today people still add chicory to their coffee to produce a richer, fuller taste. Chicory is also used medicinally by many people to manage high blood sugar, regulate metabolism and help detoxify the body. 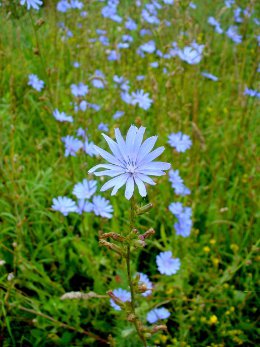 Today chicory can be found throughout the United States on roadsides, meadows and waste areas where it’s mostly viewed as a weed. However, during the last decade the use of chicory in America has expanded to agriculture and is now a desirable addition to pastures. Thanks to an extensive breeding and research program conducted in New Zealand, new and improved forage-type chicory has been developed. Forage chicory has a much higher forage value than wild chicory, often producing over 70 pounds of forage per acre per day during peak growth. It’s higher in nutrition and mineral content than alfalfa or grass and contains 10 to 32 percent protein.

In addition to its high nutritional value, forage chicory is very drought tolerant thanks to a deep taproot. It grows well in a wide variety of soils and produces both spring and summer forage. Because of this, forage chicory is especially useful to mix in with cool-season grasses and helps supplement the summer down-time of a cool-season pasture. When used in a pasture setting it’s important not to let forage chicory produce stems. By keeping it in its low-growing rosette form forage chicory is able to retain its fullest nutrition and palatability potential. Avoid letting a pasture rest for longer than a month to prevent chicory from producing stems. 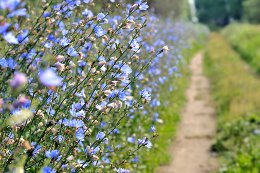 Several studies have also shown that forage chicory helps control internal parasites, especially gastrointestinal nematodes, in sheep and goats. With its high levels of sesquiterpene lactones and condensed tannins, chicory is able to reduce the survival of internal parasites and help sheep and goats achieve higher weight gains and milk production rates. Here at Nature’s Finest Seed we took this knowledge and applied it to our line of sheep and goat pasture blends. Look for forage chicory in these mixes along with our high-quality pasture grasses and legumes.