Converting Your Old Alfalfa Field into a Productive Pasture

Converting Your Old Alfalfa Field into a Productive Pasture

Alfalfa may be the “queen of the forages”, but even queens grow old and are eventually superseded. Generally, alfalfa producers can expect at least three to five years of peak productivity followed by a steady decline in yield. A stand that started with 20 to 50 plants per square foot at establishment might end up with less than 10 plants per square foot near the end of its life. A good rule of thumb is to count the number of stems per square foot. When the number of stems drops below 40 per square foot, an alfalfa stand is no longer considered economical. Of course genetics, soil quality, moisture levels and management all play a huge role in determining alfalfa longevity, but eventually your once thriving alfalfa field will thin out, weeds may begin to creep in, and it will be time to make a decision. 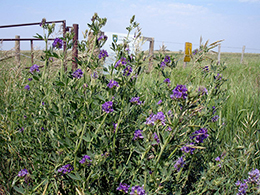 Many folks ask me if they can simply interseed alfalfa into their older alfalfa stands to help thicken them back up. While it may sound like a logical idea, this practice is not recommended due to alfalfa autotoxicity – a process where established alfalfa plants release toxins into the soil that prohibit new alfalfa seedlings from establishing. However, this autotoxicity doesn’t seem to affect the overseeding of other forage species. By overseeding with forage grasses, it’s possible to rejuvenate an old alfalfa stand and convert it into a thriving pasture. This is often the most economical solution as well, and can add several more years of productivity to your land.

So what grasses are best to overseed into alfalfa? One of the most popular and successful choices for the northern half of the country is orchardgrass, but other species such as perennial ryegrass, endophyte-free tall fescue, and meadow brome could also be used depending on your preference. Orchardgrass is often the first choice thanks to its high yields, adaptability, nutrient content and palatability with livestock. Orchardgrass/alfalfa pastures are also very good at keeping the weeds down, and herbicides are usually not necessary. 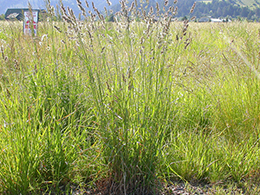 Timing is crucial when overseeding old alfalfa fields with orchardgrass. For best results, plant early enough in the season so the new grass seeds have time to establish before the alfalfa gets tall and shades out the new seedlings. If the alfalfa has already grown too tall, it may require cutting to ensure it doesn’t interfere with planting of the new seed. No-till drilling is the most efficient and successful method of interseeding, but broadcast seeding will work. Frost seeding is also an option and should be performed in late February to March for best results. Keep in mind that frost seeding has unique risks and results can be inconstant. As for the seeding rates to use when interseeding orchardgrass into alfalfa, 5-10 lbs. of orchardgrass per acre is recommended when no-till drill seeding and 15-20 lbs. per acre is recommend for broadcast seeding.

When properly managed, a mixed grass/alfalfa pasture can add years of productivity to an otherwise unproductive area. For help with your next project, feel free to contact us or consult with your local Cooperative Extension service.