Could Your Lawn Benefit From Core Aeration?

Could Your Lawn Benefit From Core Aeration?

It’s that time again. As the end of August nears and autumn approaches, our cool-season lawns are beginning to wake from their summer downtime. After being subjected to the hot, dry conditions of the past several months they’ll soon return to full vigor as temperatures taper off and conditions become ideal. It’s during this period of active growth from late August through October that lawns will benefit the most from core aeration. For those unfamiliar with the term, perhaps you’ve noticed a lawn or playing field covered in small dirt plugs. Besides being fun to throw at siblings, these dirt plugs are the result of core aeration, the process of loosening up soil to allow better air and water penetration. This is achieved by running a piece of equipment over the lawn which uses hollow tines to pull soil cores out of the earth.

The Importance of Soil Pore Space

There are many reasons why you might need to core aerate. Perhaps over the years you’ve noticed your lawn just isn’t what it used to be. It’s slowly become thinner, weedier, and less vigorous. This could be the result of soil compaction, common on sports fields and lawns that are heavily used or driven upon. Over time, compaction reduces the amount of open pore space in the soil. These pore spaces play an important role in moving water and air within the soil, as well as allowing roots to reach their full potential. Core aerating helps create open pore space as well as improving the drainage of a lawn. 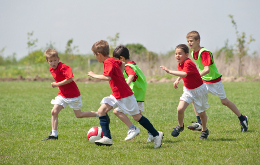 To find out for sure if your lawn is in need of core aeration, dig up a small section of your lawn at least six inches deep. Inspect the roots of the grass and notice how far they extend into the soil. If the roots only extend into the first one or two inches, the soil is compacted and core aeration would be a smart move. Not every lawn may need aerating, and newly seeded lawns should never be aerated until well established.

While autumn is the best time of the year to aerate cool-season grasses like Kentucky Bluegrass, Perennial Ryegrass, and Fescue, warm-season grasses should be aerated from April through June. This includes many of the southern grasses such as Bermudagrass, Zoysia, andBuffalograss. Prepare lawn for aeration by irrigating a day or two prior. This softens the ground and helps the aerator penetrate the soil, allowing plugs to be more easily removed. Do not aerate after prolonged rainfall. The soil should be moist but not wet. It’s also important to flag sprinkler heads and other hidden objects to ensure they are not damaged during aeration.

Do it Yourself or Hire a Professional

If you feel comfortable handling a core aerator yourself, they’re available for rent at equipment rental centers and garden centers. Most homeowners choose to hire a professional landscaping company. If renting, be sure to select an aerator with deep, hollow tines that will ensure the best penetration into the soil and removal of soil plugs. Don’t be fooled by the spiked shoes or pitchforks marketed to be aerators. If the device doesn’t remove soil from the ground, then it certainly isn’t going to aerate the soil and will probably only increase soil compaction.

During and After Core Aeration

As you run the core aerator across your lawn, be sure you are removing soil plugs that are 2 to 3” deep and ¾” in diameter. Run the core aerator back and forth across the lawn in one direction, and then repeat in a direction at a 90º angle to the first direction. That way you won’t miss any areas. Avoid the urge to remove the soil plugs after aerating as they help break down the thatch layer. They will eventually disappear and work themselves back into the grass in two to four weeks. This is also an ideal time to overseed and apply an organic type slow-release fertilizer as maximum soil-to-seed contact is possible and fertilizer has the greatest opportunity to work itself deep into the soil.

Yearly core aeration is one of the most beneficial ways of reviving and maintaining a lawn or sports field. Instead of thinking of soil as lifeless dirt, think of it as a living organism in need of water, nutrients, and air. Limit these requirements through the process of compaction and grass will struggle. Open up your soil through core aeration and grass will thrive.