Erosion Control in Pastures and Farmland

Erosion Control in Pastures and Farmland

At this very moment somewhere in America, a landowner suddenly owns slightly less land. A year from now that same landowner may be missing several tons of land. And it’s happening everywhere. Folks all over the country are literally watching their land disappear day after day, year after year. Some reports indicate our farmland is disappearing at least 10 times faster than it’s being replaced. In some areas of the country as much as six tons of soil per acre a year is lost. Who, or what, is stealing our land? The answer can be found in the natural processes of wind, water and gravity along with poor management practices of landowners. Erosion is always, and will always, be happening on some scale. Our goal shouldn’t be to stop or eliminate this natural process, but to manage it down to a tolerable level. Luckily there are some very effective methods all of us can implement in our pastures and farmland to keep soils where they belong. 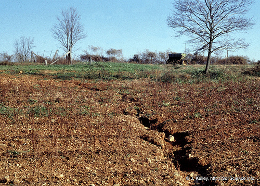 First we need to understand the types of erosion we’re likely to face on our land. Sheet erosion is one type, and is caused by the detachment of soil particles by raindrop impact. During this type of erosion soils are removed in a uniform layer like its name implies. Sheet erosion can be difficult to observe, but can result in a massive loss of topsoil over the years. Rill and gully erosion is another type. It’s more noticeable than sheet erosion and happens during heavy rainstorms. This type of erosion forms small rills which makes farming difficult. If not corrected, rills will turn into gullies which cannot be crossed with farm equipment. Wind erosion is another type, and is a major problem in many areas of the country. Flat, sandy areas are especially prone to wind erosion. It was wind erosion that was responsible for the Dust Bowl of the 1930s. Pasturelands face other unique erosion problems. Often, livestock will erode the area around their water source, most often a stream or river bank. 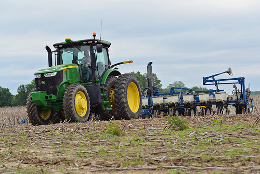 To combat erosion, the most important principle to remember is soil coverage. Bare, exposed soil is much more likely to be eroded than soils covered in plants or mulch. Try to limit or minimize the amount of bare soil you expose. Practice minimum tillage methods such as no-till farming. No-till farming allows you to grow crops from year to year without traditional tilling methods. By using specialized seeding equipment, it’s possible to plant seeds directly into undisturbed soils. Contact your local Cooperative Extension Service for more information about no-till farming and to see if it could be used in your situation.

Planting cover crops is also an excellent way to limit soil erosion. Cover crops are planted during the off-season in fields, gardens and pastures, and help provide soil coverage. Not only do cover crops help slow erosion, but they can also improve soils. Legumes such as white clover are a great example of this. White clover is a “nitrogen-fixer”, meaning it can take atmospheric nitrogen and convert it into a usable soil nutrient. Grasses such as annual and perennial ryegrass are also used as cover crops.

Other Ways to Slow Erosion

Some other ways of reducing erosion on your pasture or farmland include: