With nights now dipping into the freezing temperatures, my wildflower garden is nearing its end. Throughout the year I’ve watched it change colors, shapes and even smells as each species had its moment in the spotlight. Some blooms lasted months; some days. But there was one species that was consistent the whole time and bloomed profusely from early spring to late fall. In fact, here it is mid-October and it’s still producing new flowers. Firewheel (Gaillardia pulchella), one of our native self-seeding annuals, was the star of my wildflower garden this year. Its popularity with the pollinating insects was noticed too. At times a single flower could be seen with two or more honeybees foraging enthusiastically. Butterflies, bumblebees and native bees also spent a lot of time among the firewheel. With a history steeped in legend and a widespread appeal among modern gardeners, it’s no wonder firewheel has become one of the most widespread wildflowers planted in North America.

How Firewheel Got its Color

Firewheel has a rich history in Native American lore. In the book “Legends and Lore of Texas Wildflowers” by Elizabeth Silverthorne, an old Mexican legend tells how the firewheel got its unique color. According to the story, firewheel was once an all yellow wildflower in the days of the Aztecs. Women would adorn themselves with the bright yellow flowers, and children would play among them in the meadows. Then Cortez came, spreading death and destruction throughout the land. The bright yellow flower felt pity for the deaths of the inhabitants and caught their blood as it fell. To this day the firewheel remains red with the blood of the Aztecs. 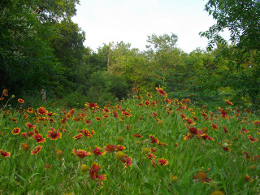 Firewheel is also known as Indian blanket flower, a name that comes from another legend. In the same book, the story goes that braves from a certain tribe went to war, leaving behind their wives and children. Soon after, the wife of the chief began weaving a blanket for her husband. In the blanket she wove threads of red and orange, each pattern a symbol of her prayer to the Great Spirit to keep her husband safe. One day the daughter of the chief was out playing in the woods and got lost. Night soon fell, and the little girl prayed to the Great Spirit to send the blanket to keep her warm during the night. She fell asleep. The next morning she found herself covered in flowers of the same red and orange colors as the blanket. Her father, returning from war, found his daughter covered in the beautiful flowers. From that time on, the flowers were called Indian blanket flower.

Easy to Grow, Easy to Maintain

From personal experience, firewheel is one of the easiest wildflowers to grow. It thrives in heat and can tolerate drought and poor soil conditions. In the wild, firewheel can often be seen growing along roadsides, fence lines and meadows. Firewheel is native to the Southwest and Great Plains region, but has been naturalized in many other places. Even though it’s an annual, firewheel is a prolific self-seeder and will come back season after season without any help at all.

How to Grow Firewheel 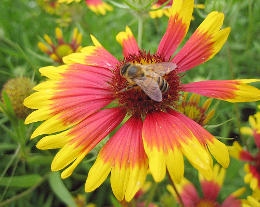 To establish firewheel, sow the seed in late fall or spring in an area with full or part sun. Make sure the area is well-drained. Rake the area before seeding to ensure good seed-to-soil contact. Keep the area moist, but not soaked. With adequate moisture, firewheel should germinate in about 1-2 weeks. Firewheel seeds are easy to collect for seeding other areas too. This wildflower requires very little maintenance, but could use some deadheading throughout the season to keep it blooming at its full potential. However, firewheel is one of the best plants for “plant and forget about it” gardeners.