The word of the day is grenadine. To many this means the sweet syrup added to their favorite mixed drink; to others it’s a word that seems exotic, conjuring images of something striking and maybe even a little dangerous. To me grenadine means globemallow and nothing less. Globemallow is the common name for Sphaeralcea, a genus that contains about 50 plants in the Americas. Most of those are in North America and the majority of them have a special colored flower in the orange to red range. Because this color is unusual in other flowers, it was given the name “grenadine.” While globemallows are all edible, they unfortunately do not have a taste to match the brilliance of their flowers. Animals don’t seem to care one way or another, they eat it happily anyway.

Most globemallows are drought hardy and are as tough as nails. I have seen scarlet globmallow mowed regularly at 2.5 inches every couple of weeks, receive only the usual 18 inches or less of precipitation, and show no signs of stress. I should say that when they get mowed regularly, the flowers get chopped off before they open. This same patch of globemallows appeared in the middle of an abandoned gravel driveway that had been locked in the middle of agricultural and housing land for generations. Maybe the only problem with globemallows is that they are not their best in soils rich in anything. Whether it be nitrogen, carbon, or water; they simply don’t need that much. While I have seen some fine specimens in gardens, they thrive best in the worst areas of your landscape.

Here at Nature’s Seed we have five species of globemallow to meet the needs of most western ranges and gardens:

I was able to see desert globemallow while I was training for deployment in New Mexico. It took scorching heat and drought much better than any of the soldiers and didn’t complain a bit. This is not a northern species so it won’t like the cold, but if you are on the southern end of Utah and Colorado, or further south, this is the plant for you. 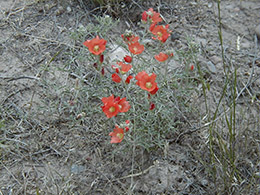 This is the workhorse globemallow. It grows from south of the Mexican border to north of the Canadian border. It spreads from the eastern edge of the Great Plains to the Sierras in the west. I have seen it growing low in the valleys to the upper foothills. If you question globemallows growing in your area, try scarlet globemallow. It is the most likely to survive unusual conditions outside of the normal western globemallow regions. 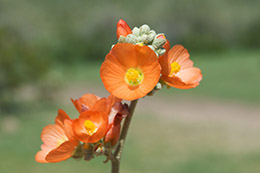 Native to the Senora Desert in the southern parts of Arizona and California,Coulter's globemallow is the most heat and drought loving species we carry. Again, this is not one for the cold and wet. 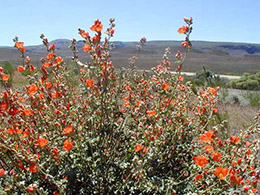 This has the most spectacular color of the globemallows I have seen. It pushes more into the reds and almost glows in the sun. It is more of a northern dweller and most happy from southern Nevada northward. Munro globemallow also has a long bloom time, usually from May to August depending on your location. 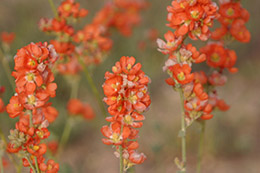 Nelson globemallow is the lovely central sibling to the scarlet globemallow. It does not cover as much area, nor is it as tolerant of heat and cold, but it is reliable and common in Arizona and eastern Utah near the southern and eastern boarders of its range.