How to Increase Pheasant Populations on Your Land

How to Increase Pheasant Populations on Your Land

This past Saturday marked the opening day of the pheasant hunt in my state. For the first time in years I decided to get up at the crack of dawn and head out into the fields to see if I could bag some birds for dinner. Although I came away empty handed I had a good time and enjoyed the early November sunshine. Sadly, pheasant hunting just isn’t what I remember as a boy. There seems to be less birds and less land available for hunting nowadays. But it’s not just my imagination. According to the Department of Natural Resources, pheasant populations have been dropping significantly since their peak in the mid-1900s. Several factors are to blame, but the biggest reason has to do with habitat loss and changes in agricultural practices.

The ring-necked pheasant was introduced to the United States in the 1800s and quickly spread throughout much of the country. It thrived on farmland which, back then, consisted mostly of small fields 10-20 acres in size. Because fields were smaller, fencerows and hedgerows were more common and allowed brush, grasses and other vegetation to grow thick. Large idle pasturelands were also more common and provided prime pheasant habitat. With a shift in agricultural techniques which favor large fields, frequent tillage and harvesting, chemical weed control and wildfire prevention, pheasant habitat has decreased. While it’s important to be profitable in our agricultural pursuits, there are some things we can do to increase the populations of this beautiful game bird.

The Importance of Nesting Habitat 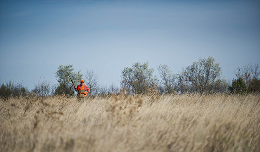 Pheasants require different types of habitat during different times of the year. Nesting habitat is perhaps the most crucial period and often the most vulnerable time in the bird’s life. Hens will seek nesting areas with vegetation 8-10 inches high. Alfalfa, clover and other legumes are perfect. These areas need to remain undisturbed for about 40 days starting around April and wrapping up in June. Unfortunately, the cutting of hayfields during this time is one of the biggest contributors to the decline in pheasant populations. If possible, delay cutting of these areas until after June or plant legumes and other crops that don’t mature until late June.

Once pheasant chicks have been reared and can survive on their own, grasslands become the most important type of habitat. Native grasses such as Indiangrass, big bluestem, little bluestem, sideoats grama, and switchgrass offer excellent cover and forage areas. Forbs and legumes like sunflowers, prairie clover, sweet clover and sainfoin should also be included in these areas. Fencerows are especially important during this time of the year and provide shelter from hawks, owls and other predators. If possible, leave 15-30 foot wide uncut and unharvested strips around your fields and pastures. 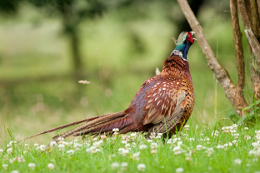 Look for areas on your property that you could designate as pheasant habitat. These areas might include field corners, thickets, river bottoms, and other odd and hard to access areas. Limit your desire for a “clean” look. It’s in these shrubby, overgrown areas that pheasants will thrive. Maintain pastures to avoid overgrazing as well. Our experts here at Nature’s Seed would be glad to design a custom pheasant habitat blend for your climate and needs. Don’t hesitate to ask us for help. Together we can ensure a strong future for the ring-necked pheasant.