Is a Green Roof Right for You?

Is a Green Roof Right for You?

The idea is nothing new. Take a bare, boring roof and replace it with green grass, flowers and other vegetation. The Hanging Gardens of Babylon were one of the first recorded examples of green roofs, as well as the ancient Scandinavian sod roofs. Early green roofs served as efficient insulation during the winter and effective cooling systems in the summer, especially in regions where building materials were scarce. Today, technology is combining form and function to give green roofs a legitimate place in our modern societies. The idea has taken off in Europe, but has been slower to catch on here in the United States. So, is a green roof right for you?

There are several benefits to green roof technology. First, green roofs help keep cities cool. Urban areas can often be several degrees hotter than the surrounding countryside. By replacing concrete, metal, and other traditional building materials with vegetation, the amount of heat emitted from rooftops is reduced. Many cities now offer incentives to encourage builders to design and install green roofs on their buildings.

Benefits for the Homeowner 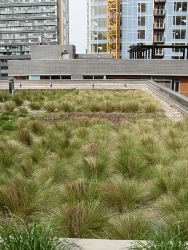 But green roofs aren’t just for cities. For the homeowner, green roofs reduce heating and cooling costs by keeping a house warmer in the winter and cooler in the summer. Studies report the typical homeowner can expect around a 25 percent reduction in summer cooling needs. Green roofs are also excellent at reducing noise pollution, decreasing rainwater runoff, increasing the life of a roof and filtering air pollutants. Looking for a way to increase the value of your home? It’s estimated that adding a green roof could increase the value of your home by 7 percent.

Green roofs are also an important part of urban agriculture. In areas where space is limited and fresh produce is often unavailable, growing food on top of roofs offers a solution to the problem of urban food deserts. Like community gardens, roof top gardening helps strengthen communities and promotes local agriculture. Some restaurants now grow their own herbs and spices on their roofs, and several schools have incorporated roof top gardening into their programs. Students plant, grow and harvest produce that they later eat in the cafeteria.

On top of all these benefits, green roofs just plain look good. Almost any type of plant can be grown on green roofs. Ornamental grasses are some of the more common plant materials for green roofs. Native warm-season grasses such as blue grama,Indiangrass and little bluestem are great low maintenance choices. Wildflowers can be planted into green roofs to provide habitat and food sources for pollinators and other wildlife. Shrubs and even small trees are also used, although you’ll need to determine whether your roof can support the additional weight of the soil, water and plants.

Disadvantages and Obstacles of Green Roofing

Green roofs certainly have some disadvantages and aren’t for everyone. The initial cost can be a major determent as green roofs can cost more than double a normal roof. Waterproofing is required as well as specialized drainage systems. But perhaps the biggest obstacle for homeowners is the demanding structural requirements. Green roofs are very heavy. Many homes and buildings would need to be retrofitted to support the weight of a green roof, increasing the overall cost of the project. Roof pitch would also need to be considered and may limit the types of plants used for green roofs.