Maintaining Your Lawn and Garden During a Heat Wave

Maintaining Your Lawn and Garden During a Heat Wave

Unless you’ve spent your summer curled up in a dark cave somewhere, (which really isn’t such a bad idea right now), you’ve probably noticed it’s hot outside. And not just normal summertime hot either. Thousands of daily high temperature records have been broken across the U.S during the past few weeks, coupled with the fact that the past 12 months have been the warmest period recorded in the U.S since record-keeping began in 1895! With such record-setting heat contributing to widespread drought conditions, the Department of Agriculture has declared natural disaster areas in 26 states. This is the largest ever natural disaster in American history. With such unprecedented heat and drought sucking the life out of our lawns and gardens, there are a few simple tricks we can use to ease the suffering of our landscapes.

For much of the U.S., cool-season grasses (also known as C3 grasses) such as Kentucky bluegrass, perennial ryegrass, and fescue are the norm. These grasses, beautiful as they are, have an optimum temperature range of 60-75 degrees F. Simply put, they are designed for fixing carbon dioxide more efficiently in cooler environments. Once temperatures exceed that range these grasses tend to struggle and want to go dormant. While dormancy isn’t necessarily a bad thing, most homeowners would rather not have their lawns turn a crispy brown. 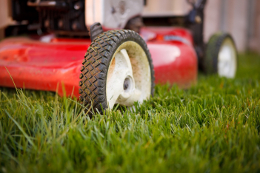 One of the best ways to avoid heat related lawn stress is to mow lawn higher than normal. During heat waves, lawns should be kept at 3-4 inches in height. Leaving grass a little taller helps to retain water and encourages a deeper root growth. The deeper the roots, the easier it is for grass to access moisture even after the first couple inches of soil surface dries out. When it comes time to mow, make sure mower blades are as sharp as possible. Clean cuts will ensure minimal water loss, while lawn cut with dull mower blades can lead to shredded, torn, and ripped grass blades that leak moisture. It’s also a good idea to mow your lawn early in the morning (without offending the neighborhood) or late in the evening to minimize water loss and prevent heat related illnesses.

It’s also important not to apply any fertilizers during a heat wave. Applying fertilizer during periods of extreme heat can be damaging to cool-season grasses and could cause fertilizer burns. Instead, apply a slow-release organic fertilizer once around mid-May and again in September. On the other hand, warm-season grasses will benefit from midsummer fertilization since they are actively growing at this time.

Irrigation during a heat wave is crucial to the success of your cool-season lawn grass, but care should be taken to be as efficient as possible. One of my personal pet peeves is when I notice someone watering their grass in the middle of the day. This practice is extremely wasteful since most of the water will evaporate before soaking down into the soil anyway. Instead, irrigate early in the morning before the sun comes up if possible. Night watering, while still better than day watering, should also be avoided since this increases the risk of lawn disease. When irrigating, water deeply and infrequently instead of lightly and frequently. Watering deeply two or three times a week will encourage deeper root growth. For optimum efficiency in gardens, use a drip irrigation system. This will minimize water wasted through evaporation and instead delivers it directly to the base of the plant where it’s needed. Apply a mulch to help keep the soil moist in gardens.

If irrigating a cool-season lawn during a heat wave becomes too expensive or time consuming, consider letting the grass go dormant. While it won’t look the most visually pleasing, this is an acceptable option in some circumstances. Most cool season lawn grasses have this mechanism which they use to survive prolong periods of drought. As long as the grass has been established for a few years, and as long as you irrigate the lawn with 1” of water every 2 to 3 weeks, your lawn should green up again in the autumn when temperatures are cool enough or the heat wave is over. Be sure to watch for weed infestations when letting a lawn go dormant as lawns are more susceptible in their dormant state.

Warm-Season Grasses Have an Advantage During a Heat Wave

If your climate allows, avoid future heat wave related issues with your lawn by planting drought-tolerant warm-season grasses such as buffalograss, bermudagrass, and zoysia. Lawns grown from these types of grasses require only a fraction of the water that cool-season grasses consume and thrive at temperatures in the 80-95 degree range. Buffalograss especially is known for its use in water-wise landscapes and is the most drought-tolerant of all lawn grasses. 1-2 inches of water every other week is all that’s needed to keep buffalograss green, even in the heat of summer.

This heat wave might not be giving up anytime soon, but that doesn’t mean you have to give up on your landscape. By following these simple tips you can help your lawn and garden make it through these record-setting temperatures.