Myco-What? The Role of Mycorrhizal Fungi in Soils

Myco-What? The Role of Mycorrhizal Fungi in Soils

As an avid outdoorsman, I’m always willing to try new outdoor activities. This past month I decided to try my luck at hunting wild turkeys for the first time. One thing I quickly learned about turkey hunting is that you spend a lot of time sitting perfectly still, sometimes for hours at a time. Let’s just say I had a lot of time to observe my surroundings. As I sat there I was amazed at the diversity and vigor of the native vegetation. From the lush green grasses to the brilliant masses of wildflowers growing in the meadows, everything was healthy and full of life. No fertilizers or pesticides were required to achieve it. No soil amending necessary. That’s because in nature plants are growing in a living soil undisturbed by humans. In fact, in just one handful of this living soil dwells more than 100 million bacteria, several miles of fungal filaments and another million algae, protozoa and nematodes. Living soil also contains mycorrhizal fungi, one of the most important components of the soil ecosystem. 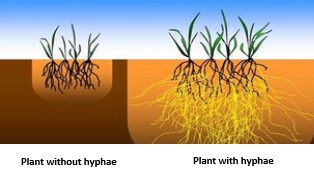 Mycorrhizal fungi, or mycorrhiza, are specialized fungi that form symbiotic relationships with plants. Their very name describes the role these fungi play. “Myco” means fungus while “rhiza” means root. This “fungus root” makes its home in and on the roots of 90% of all plant species. Mycorrhiza acts as extensions of the plant’s root system, making roots more efficient at absorbing water and nutrients. Just as the lining of our small intestine is covered with millions of microscopic finger-like villus, mycorrhiza form hyphae which line plant roots, increasing the surface area of the root up to 1,000 times. Not only do mycorrhizal fungi boost the plant’s vigor by increasing the surface area of its roots, mycorrhiza also produces enzymes that dissolve nutrients that would otherwise remain inaccessible in the soil. In return, the plant provides the fungi with life-sustaining carbohydrates. This mutually beneficial relationship is a win-win for both the plant and the fungi.

Lacking In Most Residential Soils 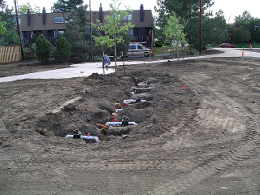 While mycorrhiza is plentiful in undisturbed soils, the intricate web they form in the soil ecosystem is fragile and can be degraded very easily. Common practices such as soil compaction, chemical applications, tillage, construction and erosion can greatly reduce the amount of mycorrhiza in an area. It’s no wonder most residential yards are severally lacking this beneficial fungal helper. The good news is mycorrhiza can be reintroduced to areas where it’s been lost. By collecting and isolating existing mycorrhiza from undisturbed soils, it can be cultured in a laboratory media and gathered as an inoculum. It can then be applied to grass seeds and other seeds before planting.

Here at Nature’s Finest Seed, we treat all our turfgrass blends with Soil-Boost™. Soil-Boost™ is a mycorrhizal inoculum that helps restore soils to their undisturbed condition. It contains a specific species of mycorrhizal fungi native to North America. In trials conducted by the USGS, this particular mycorrhiza either improved germination or increased biomass development in over 70% of the plant species tested. On top of this, treating our grass seed with Soil-Boost™ has been shown to increase lawn establishment rate, improve lawn health, increase resistance to soil borne pathogens, out compete weed species, improve soil aeration and drainage, and increase drought and salt tolerance.