Not Just for Livestock: Pastures for Honey Bees

Not Just for Livestock: Pastures for Honey Bees

We’re all familiar with the image of a cow, horse or sheep grazing in a lush green pasture under a clear blue sky. The sun is shining, the birds chirping. It’s an image deeply ingrained in our minds – a product of thousands of years of agrarian heritage. But what about pastures devoted to a different type of “livestock”? Think of that cow in the pasture again. Shrink it down to the size of a peanut, give it wings, replace its moo with a buzz and its milk with honey and you get the picture.

A Sanctuary for the Honey Bee

Honey bee pastures are not an entirely new idea. Ever since that first brave soul stuck his hand into a hive and put what he found into his mouth, humans have been raising and managing honey bee colonies. Beekeepers have always strived for the best conditions possible for their hives, often placing them in and around fields, meadows and other areas abundant in nectar and pollen. However, with a growing concern over mass die-offs, colony collapse disorder and other problems plaguing honey bee populations lately, beekeepers and hobbyists everywhere are turning to specialized honeybee pastures to create much needed sanctuaries. 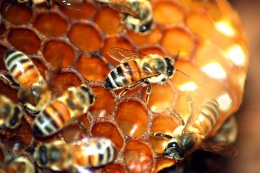 A honey bee pasture is exactly what it sounds like. Just like a livestock pasture contains a variety of grasses and legumes designed for the optimal nutritional needs of a cow or sheep, honey bee pastures contain plants that are best for their forage needs. This includes a large amount of nectar and pollen-rich legumes and wildflowers. Honey bee pastures can be as small or as large as space allows. They can be grown by the acre in large fields. They can also be adapted for use along roadsides, fence lines, in gardens, in orchards, in between vineyard rows and other otherwise unproductive areas. They’re easy to grow and maintain, and should always remain pesticide-free.

Alsike clover is considered one of the best plants for honey bees in North America, especially in cool moist areas like the Pacific Northwest. Unlike other clover species, alsike clover thrives in wet waterlogged soils and is very winter hardy. It produces an abundance of pinkish blossoms that bloom from spring to summer.

Crimson clover is an annual clover best adapted to the southern half of the country. It blooms early in the season, producing a showy display of crimson red blossoms from early April to June. Another honey bee favorite, crimson clover is capable of self-seeding if environmental conditions are right, but will thin out considerably over the years. Prefers well-drained sandy or clay soils.

Honey from white clover is considered by many to be the standard by which all other honeys are judged. White clover prefers cooler climates, but can tolerate a wide range of conditions. This perennial clover also makes a great additive in grasses and lawns. Produces small white flowers which bloom from spring to fall.

Sweet clover is another top honey bee plant. Unlike the other clovers, sweet clover is very drought and heat tolerant, often growing in poor soils with no irrigation. For a long time sweet clover was considered a weed with little value. It’s only been within the last century that the value of sweet clover for honey production has been recognized. It produces blossoms heavy in pollen and nectar from April until July, peaking in the summer months.

Sainfoin is considered an exceptional source of nectar and pollen for honey bees, with pink flowers that blossom from spring until fall. Sainfoin is also very drought resistant, winter hardy and able to tolerant a wide range of temperatures. Prefers light, well drained soils and is unaffected by diseases or pests. A very desirable perennial legume for honey bees pastures.

Each of our honey bee pasture blends also contains 10% wildflowers. These wildflowers have been selected based on pollen and nectar amounts, climate conditions and ability to self-seed. Some species, such as lacy phacelia (Phacelia tanacetifolia) and bluebells (Phacelia campanularia), have been recognized as two of the five top-choice wildflowers for honey bee pastures according to studies performed by USDA-ARS Pollinating Insects- Biology, Management, and Systematics Research Unit. Other wildflowers, such as corn flower and purple prairie clover, are well-known for their popularity with honey bees.