A couple days ago while perusing the gardening department of my local hardware store, I couldn’t help but noticed the large, brick-like bales of compressed peat moss. Plastered with pictures of flowers, rich soil, and sunshine, the company that designed the packaging obviously spared no expense trying to convey the idea that their peat moss product would turn your lawn and garden into the Garden of Eden. Especially interesting were some of the phrases found on the packaging in big, bold lettering. “A green product”, “100% organic”, “natural”, and “use on anything that needs to grow better.” Wow I thought. With such broad, sweeping claims and strategic display of environmentally friendly keywords, the peat moss industry is looking a bit desperate. Maybe it’s because they are.

Where and How Peat Moss is Formed

Many people (including myself for many years) have never really given much thought about peat moss, how it’s made, or where it comes from. Most people are familiar with peat moss and its use in establishing grass seed. Traditionally, peat moss has been used as a top-dressing to reduce evaporation during critical stages of seed germination and seedling establishment. Peat moss is the product of living sphagnum moss, and is formed in wetland bogs. As the living sphagnum moss dies and sinks, it only partially decomposes due to the lack of oxygen in the water. This partially decomposed matter forms peat. These peat bogs can be thousands of years old, growing at a rate of one millimeter (1/25th of an inch) per year. Most of the peat moss available in the North American market comes from Canada where it’s mined after scraping off the top layer of the living sphagnum moss found in these bogs. To do this, the bogs are drained using a system of ditches. After the bog is drained the living sphagnum moss begins to dry and dies. This will eventually be removed, exposing the peat which will be collected, transported to a processing facility, screened, packaged, and shipped off for sale. 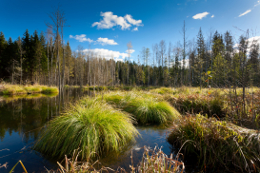 The controversy over peat moss mining has to do with its negative effects on the environment, namely the destruction of wetland ecosystems. Bogs play a major role in purifying water, air, and providing flood control. The living layer of sphagnum moss provides habitat to a diversity of plants and wildlife, including highly specialized plant species only found in bogs and endangered animals that call peat bogs home. Another major contribution bogs have on the environment is the ability to absorb carbon dioxide. Some scientists believe bogs could store more carbon than the entire world’s tropical rainforests. By draining these wetland bogs, we start to release huge amounts of carbon dioxide back into the atmosphere where it acts as a greenhouse gas. There are also archeological reasons not to destroy wetland bogs. Due to the extremely low oxygen content and acidity levels found in peat bogs, almost everything thrown into them becomes preserved. This includes wooden artifacts and even people who were buried there thousands of years ago. One such example is the famous “Tollund Man”, the mummified remains of a man who lived during the 4th century BC. He was found in a bog in Denmark, and was so well preserve that he was mistaken for a recent murder victim.

The peat moss industry goes to great lengths to try and justify their business and downplay the environmental impacts of peat mining. They claim that peat moss is a renewable resource no different than tree farming. Granted, peat moss is renewable… every couple thousand years! Government regulations require that peat moss companies restore the mined area back into a functioning wetland once harvesting is complete. This has the illusion of being renewable, yet peat bogs take thousands of years to evolve; once a bog is destroyed it can never fully be restored. Wetland scientists claim that these “restored” bogs have little resemblance to natural bogs, pointing out the monoculture and lack of biodiversity these restored bogs display. The peat moss industry will counter-claim that only five to ten years are required for a restored bog to become a fully functioning wetland again. Considering the amount of time it took to form the original bogs, many people find their claims hard to believe. Perhaps this is why the Royal Horticultural Society has been trying to educate and reduce the use of peat moss in the landscape and promote the use of alternatives in recent years.

There are many alternatives to peat moss that don’t destroy the environment and actually do a better job. One popular top-dressing that is commonly used for establishing new lawns is straw. Using straw is cheap and easy, but comes with its own risks. Sometimes straw is contaminated with weed seeds and will cause an infestation in your new lawn. It’s important to know the source of the straw and to make sure it’s as clean as possible. Spreading one 80 lb. bale per 1000 square feet is adequate. Make sure not to apply the straw so thick that it completely covers the ground and chokes out the grass seedlings. For an even better start, consider using a professional top-dressing such as our Seed Aide product. Seed Aide combines post-consumer recycled paper, recycled clean whole-wood mulch, organic tackifier, and bio-stimulant for superior seed establishment. The organic tackifier sticks soil particles together to reduce soil erosion, water runoff, and seed wash-out while the bio-stimulant increases root mass and stress tolerance for improved grass establishment.

Whatever method you decide to use when germinating your freshly sown grass seed, one thing is for certain. The use of peat moss is environmentally irresponsible and needs to be phased out. There are many other alternatives that provide cheaper and often more effective means to retain moisture and help grass seed to germinate. Despite the pretty packaging and clever phrases, that brick of peat moss won’t be available again for a few thousand years.