The Bee’s Knees: Forage Influence on Honey Flavor and Color

The Bee’s Knees: Forage Influence on Honey Flavor and Color

In recent years, beekeeping has become quite a popular hobby. Thanks to an increased awareness of the struggles our pollinators are experiencing, along with the added fun and excitement of raising honeybees and producing your own honey, people from all walks of life are suiting up and heading out to the bee yard. Even celebrities are taking up the hobby. Earlier this year, Morgan Freeman made news by discussing how he’d recently started beekeeping. Here at Nature’s Seed, beekeeping fever hit a few of our team members as well, including myself. For those that like the outdoors, working with the land and are inclined to agricultural pursuits, beekeeping comes natural.

One of the most fascinating observations I experienced this year in my beekeeping adventure was the influence of forage on honey flavor and color. Recently, my county’s beekeeping association held a honey tasting contest during our last club meeting. It was amazing to see all the different colors and taste all the different variations of honey. Even beekeepers from the same town had completely different tasting honeys. But why? Several studies have been conducted on the subject, and each has concluded that the botanic origin of the pollen and nectar has statistically very high significance on the quality of its honey. The material the beehives are made of, as well as the colony’s queen, had no influence on its honey (Tucak, Periškić, Škrivanko & Konjarević, 2007). 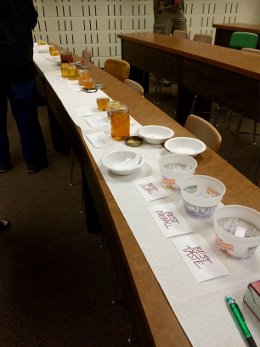 This comes as no surprise to most beekeepers. It’s been known for centuries that different forages create different tasting honeys and colors. According to the National Honey Board, a group that works to educate consumers about the benefits and uses for honey, there are more than 300 unique types of honey available in the United States, each originating from a different floral source. This year, my honey was a very light golden color and had a smooth, delicate taste with a mildly spicy finish. This can be attributed to the several surrounding alfalfa fields, as well as my own 24-acre sainfoin pasture that I planted specifically as bee forage.

Here are some of the most common forages and their associated honey varieties:

Clover is the standard when it comes to honey color and flavor. Generally, clover honey taste can be classified in the delicate category, and can vary in color from clear as water to light amber. White Dutch, alsike, crimson and the sweet clovers are the major honey-producing types.

Buckwheat honey can be found in the cool, moist climates of the Northeast. Honeybees that forage on buckwheat produce a dark brown honey with a strong, pungent flavor with malty tones. 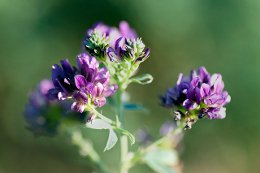 Alfalfa is considered the most important honey plant throughout the Intermountain West. When left uncut, alfalfa produces copious amounts of small purple, blue and white blossoms. Alfalfa honey is very light in color and famous for its fine taste with a hint of spice.

Sage honey is common in California and can be described as having a mild, delicate flavor with a floral aftertaste. It’s usually light gold in color but can be found in shades of amber. Some sage honeys don’t crystalize.

Tupelo honey comes from the tupelo trees of the southeastern United States. It’s usually a lighter colored honey and folks describe tupelo honey has having a bright, fruity taste. Singer-songwriter Van Morrison furthered the fame of tupelo honey with his song named after the honey.

Wildflower honey is a very broad category. Whatever happens to be in bloom during the season can be called wildflower honey. Because it’s derived from many floral sources, its taste can be unpredictable and unique.