The Humble Mushroom: An Indicator of a Healthy Lawn

The Humble Mushroom: An Indicator of a Healthy Lawn

Call me crazy, but I love rainy days. Maybe it’s the product of growing up in a high-mountain desert valley that's helped me develop this appreciation for a good downpour. Or perhaps it’s because most of my life I’ve been involved in the horticultural and landscape professions, and rainy days meant a day off of work. I also love how the rain seems to cleanse and rejuvenate the world around us. One of the best feelings in the world has to be taking a stroll through the landscape after a rainstorm, breathing in the fresh air and observing the plants as they begin to absorb the life-sustaining moisture. For the next several days the effects of the rainstorm can be seen as life in the landscape begins to thrive, oftentimes resulting in the formation of mushrooms which can be found poking their way up through the lawn grass. For some folks, these fungal structures add a charming touch to their lawns. For others, they are disgusting and loathsome. I’ve met and dealt with both kinds of people. Whatever your opinion is on mushrooms, there is one thing we should all agree on. A proper understanding of why they are there and what they are doing is key to knowing how to deal with these mysterious little life forms.

First of all, “little life forms” is probably not the best way to describe mushrooms. While it’s true that the mushroom itself is small, it’s only a very small part of the whole fungal organism. The real bulk and structure of the fungus can be found under the soil and is made up of fiber-like strands called mycelium. One way to imagine this fungal network is by picturing an underground tree. 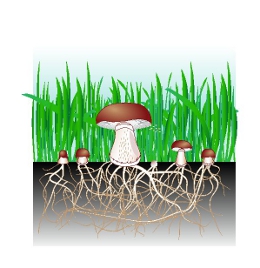 The mycelium would be the trunk and branches, while the mushrooms which sprout up from the ground are only the fruit of that tree. This underground mycelium network can spread for many feet, yards, or even many acres. In fact, scientists have found a mycelium network living under a forest in Michigan that covers over 40 acres and is estimated to weigh over 112 tons while being at least 1,500 years old. So while appearing to be small and insignificant, these mushrooms we find growing in our lawns are actually just the reproductive parts of a much larger mycelium structure that will never see the light of day. For this reason, people obsessed with removing or “eradicating” (yes I’ve actually had a client tell me to do this) mushrooms from their yard are fighting a losing battle.

So now that we know what mushrooms are, what exactly are they doing in our lawns? As previously mentioned, mushrooms are the fruiting parts of mycelium. This mycelium is actually feeding on the organic material found in your soil. This can be buried scraps of wood, dead tree roots, or other decomposing organic material. Fungi are unable to produce their own food, unlike plants that use the sun for energy. This feeding habit of fungi is actually a very good indicator that your soil has an adequate amount of organic matter. This organic matter is crucial to a healthy, lush lawn. As the fungi feed on this organic material, they also help to break up and hasten the decomposition process. This in turn helps the roots of the lawn grass absorb the nutrients found in the organic matter. Mushrooms are Mother Nature’s way of saying “hey, this is good soil.” 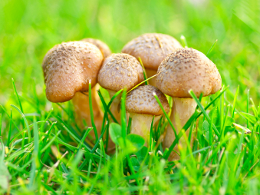 There might be occasions where the presence of mushrooms in your lawn might be something to avoid, such as where young children play. While some mushrooms are edible, most common lawn mushrooms are not and will cause sickness and even death. Young children, unfamiliar with the difference between mushrooms in the grocery store and wild mushrooms, could be tempted to eat the mushrooms they find growing in their yards. In this situation, it would be a good idea to physically remove the mushrooms from the area. If a part of your yard is prone to mushroom growth, be sure to check the drainage and irrigation in that area. Many times mushroom growth is associated with over-irrigation and poor drainage. Aerating the soil will also help with drainage, resulting in fewer mushrooms. If that doesn’t solve the problem, applying a fertilizer high in nitrogen will help hasten decomposition of organic matter. The nitrogen should be readily available and not a slow-release or water-insoluble formulation. This will eventually starve the mycelium and reduce the amount of mushrooms in your lawn. This method should only be applied in situations when there’s a real concern about children ingesting mushrooms, since excess nitrogen will actually damage your lawn.

Mushrooms, and the fungal networks that spawn them, are truly a fascinating life form. Fungi are more closely related to animals than to plants, a fact that makes them all the more mysterious. They inhabit a realm of nature that is not well understood by us surface dwellers. In complete darkness they search out their food and live out their extremely long life cycles; the only evidence of their existence being the mushrooms they send to the surface. For lawns, they are important in breaking down organic matter into usable nutrients and indicating the overall quality of the soil. Perhaps it’s time to give mushrooms the same admiration we give to our beautiful flowers, shrubs, trees, and lawns.