The Importance of Legumes in Pastures

The Importance of Legumes in Pastures

Pasture grass management can be a complex subject. More than just a piece of land with grass for animals to graze on, pastures are an orchestra of elements all working together in harmony to produce the most nutritional forage day after day, year after year. Climate, soil, temperature, microbes, water, plant and animal life, sunlight and management practices must all be considered in order to achieve an efficient, functioning pasture. One of those elements includes the use of legumes within the pasture.

Legumes Part of a Productive Pasture

A legume can be described simply as plant that produces a seed pod that splits into two halves. Legumes differ from grasses in several ways. Legumes usually have small, broad compound leaves while grasses produce long slender leaves. Most legumes also develop tap roots that allow them to obtain moisture from deep within the soil. This helps them survive prolong periods of drought and dryland agricultural practices. For animal grazing, legumes are important because they offer rich amounts of digestible protein, calcium and minerals. When mixed with grasses, the nutritional contribution of legumes greatly increases the overall value and quality of a pasture.

Legumes also have another unique attribute. Thanks to special microorganisms called rhizobia that live in the root nodules, legumes are able to fix atmospheric nitrogen. Basically, legumes make their own fertilizer. This nitrogen fixing ability helps to cut back the amount of fertilizer required for pastures to maximize forage production. According to the Oklahoma Cooperative Extension service, legumes can produce anywhere between 20 to 300 pounds of nitrogen per acre. That would be the equivalent of spending $8 to $120 per acre on nitrogen fertilizer at the price of 40 cents a pound. Although much of the nitrogen is consumed by the grazing animals, it gets recycled back into the soil through the animal’s urine and manure. 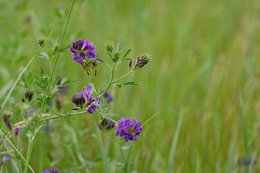 There are several excellent legume species available here at Nature’s Finest Seed to include in your pasture grass blend. Depending on the animal species, 10% to 25% of a grazing pasture should be composed of legumes with the rest grass species. Pure legume pastures will cause bloating in cattle and sheep.

Alfalfa is one of the most common legumes and is the predominate legume grown for cattle feed. Its high protein content and digestibility have made it the most widely cultivated forage legume in the world. Alfalfa is highly productive, nutritious and palatable. However, it can cause bloating in some animals. This is usually not a problem when blended with a large percentage of pasture grasses. It performs best on irrigated, fertile soils in drier climates but can also be grown in dryland conditions. In areas with large amounts of rainfall and high humidity it experiences root rot and other diseases.

Birdsfoot trefoil works great for areas with a high water table, drainage issues, poor soil fertility or low pH. This long-lived herbaceous perennial legume, cultivated in Europe since the early 1900’s, has become a valuable forage crop here in North America. Its extensive root system comes complete with taproot and lateral roots, and is able to find adequate nutrients in infertile soil while at the same time showing a remarkable resistance to root rot, a disease devastating to alfalfa. Birdsfoot trefoil is able to grow in soils with a pH range of 5.5 to 7.5, extremes which are unsuitable for optimum alfalfa growth. Most cultivars of birdsfoot trefoil grow to a height of two to three feet and produce stems that are not quite as big around as alfalfa. But perhaps the most interesting and beneficial aspect of birdsfoot trefoil is its non-bloating properties. 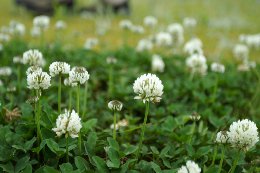 White clover is also a commonly used legume in pastures. It is considered the most important forage legume in the United Kingdom, and is grown extensively in U.S. pastures along with grass species. White clover spreads easily through rhizomes and fills in areas between grasses. This creeping growth habit helps keep weeds from spreading, provides a rapid regrowth following grazing and increases forage yields. It is particularly valuable in Southern pastures were warm-season grasses are used. Clover is the most productive during the spring and fall when warm-season grasses are dormant and then slows down once the warm-season grasses become productive in the summer. This helps Southern pastures achieve year-round forage production. Clover can cause bloating when the clover/grass ratio is too high. However, this can be avoided by growing it along with a large percentage of pasture grasses. White clover is very adaptable, but prefers cool moist conditions.

These three legumes are available in several of our pasture seed blends or as pure seed mixes by contacting us directly.