Anybody who has tried to maintain a traditional Kentucky bluegrass lawn in an area of the country that experiences hot, dry summers knows the frustration this can sometimes lead to. Nothing against bluegrass; I happen to find it superior in color, texture, and feel compared to other grasses. When allowed to go dormant Kentucky bluegrass is actually very drought tolerant and can survive several months without significant irrigation. The downside to this dormancy is the dreaded brown, dead-like look that many find unacceptable for a lawn. This is the problem of using a non-native, cool-season grass in places that nature never intended it to be used. For those of us that find it difficult to maintain this European native over here in the United States, or would like to save water, time, and cut back on input needs such as pesticide and fertilizer, I suggest buffalograss.

Buffalograss (Bouteloua dactyloides) is native to the Great Plains region of the United States, and for thousands of years has been an important forage grass for the American bison. It also happens to be one of the only grasses native to North America that’s used as a turfgrass. Unlike our beloved Kentucky bluegrass, buffalo grass is a warm-season grass. This means it thrives during the hottest times of the year. It loves the heat, and while your neighbor’s bluegrass wilts under the scorching summer sun, a buffalograss seed lawn will remain a brilliant green with little irrigation or effort. On top of its outstanding drought tolerant features, this species is much slower growing than other lawn grasses. This in turn cuts back on the maintenance involved in mowing, trimming, and fertilizing. In fact, buffalograss will actually fail if over-managed. Too much irrigation and fertilizer will harm it. Another benefit of this remarkable grass is its ability to resist pests and disease. This is truly one grass species that doesn’t mind if you forget about it for a while. 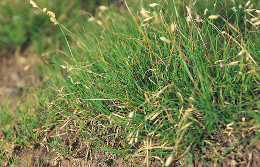 One major drawback to buffalograss is its winter performance. If your lawn is usually covered by snow in the wintertime, this isn’t such an issue. If you’re lucky enough to live in an area that supports year-round grass growing, you may be disappointed with the winter-time browning of buffalo grass. This is a feature all warm-season grasses share. But if the warm months outnumber the cooler months in your area of the country, it is a great alternative. Another factor to consider is the slow establishment. Compared to traditional bluegrass, fescue, or ryegrass lawns, buffalograss takes longer to form a thick, lush lawn. Eventually it will spread through the use of stolons and will become progressively thicker from year to year. For additional information on how to prepare, establish, fertilize, and maintain a buffalograss lawn, visit our buffalograss growing guide.

Part of a Sustainable Landscape 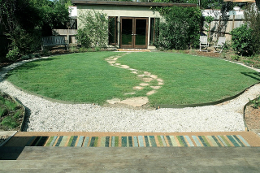 Buffalograss is a great alternative to higher maintenance grasses and fits well within a sustainable landscape. When combined with other environmentally friendly landscape practices such as rainwater harvesting, mulching grass clippings instead of removing them, and cutting back on mowing frequency, it’s possible to achieve a self-sustaining lawn while still retaining the aesthetic value we all enjoy. Even though it is slightly more expensive due to the difficulty of harvesting the seeds, in the long run it will prove to be a valuable investment. The water savings alone, on top of the money saved from not needing to apply large amounts of fertilizer or pesticides over the years is enough to make it pay for itself. As spring approaches now is the time to consider if a buffalograss lawn is right for you.