If livestock dream, which I’m sure they do, I have no doubt they’re dreaming about sunny skies and lush green pastures right about now. A particularly harsh winter throughout much the country is forcing many livestock owners to feed more hay to their animals than usual. After pasture, hay is the next best thing. It’s during these long, cold months that hay becomes the primary diet for livestock, helping them maintain body heat and adequate nutrition levels. But feeding hay can be expensive. Whether you’re looking to cut back on your own feed costs or cash in on the demand for hay, growing and producing your own hay is a wise investment.

When planning to produce hay, it’s important to consider your goals. Will you be feeding it to your own livestock? If so, what type of livestock do you own? Cattle, horses, sheep and goats have unique needs when it comes to hay. If you’re planning to sell your hay, it’s important to find out what type of hay will sell best in your area. Hay can be divided into three basic types: legume hay, grass hay and a mix of legume and grass. Each type has unique properties and nutrient content. Whatever your goals, starting out with the best plant materials is crucial for successful hay production. 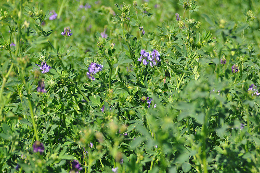 Legume hay is a popular choice for most livestock. It can be made from a wide variety of legumes including clover, vetch, sainfoin, birdsfoot trefoil and of course the “queen of the forages” – alfalfa. Legume hay is known for its high protein and calcium levels, as well being rich in vitamins and minerals. It also tends to be more palatable than other hay types. Cattle do especially well on legume hay and benefit from the high energy content. Dairy cows require the highest quality legume hay to keep up with milk production. Legume hay is also ideal for goats and lambs. On the other hand, horses usually don’t require such rich forage. In fact, a steady diet of legume hay can lead to excessive weight gain. For horses, grass hay or a legume/grass hay mix is the best choice. 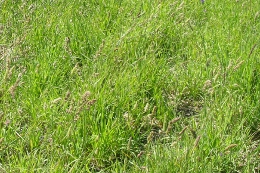 Grass hay also comes from a variety of sources including timothy, brome, orchardgrass, tall fescue, and bermudagrass. It contains lower levels of carbohydrates, protein, vitamins and minerals than legume hay. However, grass hay is very high in fiber. These lower nutrition levels along with the higher fiber content make grass hay a safe choice for horses and a great way to add roughage to an animal’s diet. When growing tall fescue for forage and hay, make sure it’s a safe, endophyte-free variety. Because grass hay contains fewer nutrients, it may be necessary to supplement your livestock’s diet to ensure its nutritional needs are being met.

Legume and grass hay blends offer the best of both worlds and help bring nutritional balance to hay. Not only do these mixes provide a more well-rounded diet, but growing them together often produces more forage than growing a legume or grass alone. When considering establishing a legume/grass hayfield, aim for a field containing around 1/3 grass to 2/3 legume. There are several excellent combinations to plant. Some of the more popular combinations are orchardgrass/alfalfa and tall fescue/alfalfa. These mixed hays are readily eaten and healthy for all types of livestock.

For inquires about any of the pasture plants mentioned in this article, don't hesitate to contact us for more information.