Perennial Ryegrass Seed Guide - How to Plant, Grow, and Maintain

How to Prepare your Soil for a Perennial Ryegrass Seed Lawn 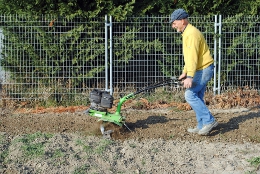 Ryegrass is a very useful grass seed used for a variety of agricultural and residential purposes. It makes for a hearty, high-performance lawn just as easily as it does a cover crop. Annual ryegrass is a frequent cover crop and green manure, which helps increase nutrients in the soil. And if you’re overseeding with ryegrass, it can minimize diseases in tightly-planted spaces and crowd out competitive weeds.

An important step before planting your perennial ryegrass seed is to prepare and grade the soil. No soil is perfect, especially the poor-draining, low quality sub-soils usually exposed by new construction. Taking the extra time and effort to improve your soil before seeding your perennial ryegrass seed lawn will reduce your water usage and save you money for years to come.

The Basics of Ryegrass

The most common question about ryegrass is if there’s a difference between perennial ryegrass and annual ryegrass, the latter known as Italian ryegrass. The short answer is that there is a difference, and it rests in the name: Annual ryegrass, as its label indicates, is short-lived. It’s great for a single season and you can rely on it to provide quick color or a boost of stability and erosion control to vulnerable or compacted soils.

Turf-type perennial ryegrass, on the other hand, only needs to be seeded once to return season after season. Perennial ryegrass prefers regions where climates consist of moderate summers and cool winters. It’s not as cold-resistant as Kentucky bluegrass or tall fescue, for example, so it thrives in states located in the Pacific Northwest.

For all its pickiness, however, perennial ryegrass demonstrates incredibly rapid germination and seedling growth, germinating in five to 14 days. Its growth process is one you can boost by adhering to the right planting methods.

How to Plant Perennial Ryegrass

Whereas Kentucky bluegrass is a rhizome-forming grass, ryegrass is a bunchgrass, and it has a rather shallow root system. This means the majority of the grass’s roots sit in the first six inches of the soil. Despite this, it manages to form a very dense sod that germinates quickly but spreads slowly.

When to Plant Perennial Ryegrass

For proper establishment, you’ll get two chances to plant: Once in the late summer (or early fall) and once again in the early spring. Prepare your seedbed at least six months before the expected planting date to make sure any soil amendments you add have time to react. Amendments should have organic fertilizer high in nitrogen content.

Like many other perennial cool-season grasses, the seeds of ryegrass go through several growing points of initiation and induction. Seeds use the time below-ground, for example, during the months of September to early March to gather and cultivate energy.

Seeds should be sown at about one-fourth to half-an-inch deep within the soil using standard lawn spreader or even a grain drill. If you’re using a spreader, you’ll need to pack the soil to make sure there is adequate seed-to-soil contact. A grain drill, on the other hand, will accurately deposit seed into the soil’s surface.

How to Grow Perennial Ryegrass

Ryegrass is a turf-grass type that needs plenty of moisture. Even if the make-up of the soil is not the most nutrient-rich, ryegrass needs proper irrigation, or it will go dormant in summer months. There are, of course, premium blends of ryegrass cultivars that are not only more drought-resistant, but they also require less water than traditional perennial ryegrass seed.

Its fertilizer needs are also quite particular. Without the right balance between fertilizer and irrigation, perennial ryegrasses tend to go dormant, so plan for a split application of nitrogen. One application in the spring and one in the fall.

Once its blades start to sprout, you should plan to mow at a height of one-and-a-half to three inches tall. Because it’s a grass that tends to form clumps, the slightly taller height will help retain a more uniform look through your lawn.

Your Perfect Lawn Is Closer Than You Think

With a bevy of benefits, hardworking ryegrass has come to be known as easy to establish, beneficial for pastures and turf, and highly adaptable to even heavy clay or poorly drained soils. If you plan to seed, establish, and manage ryegrass, you’ll need to plant, fertilize, and irrigate at the right times and in the proper proportions — and start with high-quality perennial ryegrass seed. Nature’s Seed can help you with all of these!