There’s a new legume in town – well, sort of. Used for thousands of years in Europe, sainfoin is relatively new on the scene here in the United States. It was introduced to North America over a hundred years ago, but it’s only been in the last 40 years or so that producers have begun experimenting with it. Ask around. Chances are not very many people have ever heard of it, even those involved in agriculture. Sainfoin’s no miracle crop of course, but it does have some unique and interesting characteristics that could take sainfoin from a little-known legume to a prominent crop throughout the western United States, especially with the ongoing drought conditions.

Sainfoin is a perennial legume in the same family as its more well-known cousin, alfalfa. The name “sainfoin” is French and literally means “healthy hay”. It’s also been called “holy hay” at times, probably the result of confusing “sain” with “saint”. It’s no wonder sainfoin is referred to as healthy hay. As a non-bloating legume, it can be grazed by livestock with no fear of bloating, unlike alfalfa. Sainfoin is also more palatable to livestock than alfalfa even in its mature stages. On top of that, studies have shown that sainfoin can help reduce internal parasites in sheep and goats. 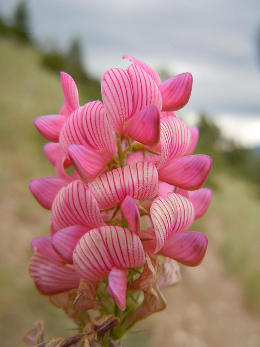 Visually, sainfoin is much different than alfalfa as well. It can grow 3-4 feet tall and is topped with a showy pinkish-purple flower head. It’s this flower head that gives sainfoin another special position among plants – its ability to produce superior quality honey. Sainfoin produces large amounts of nectar and pollen that honey bees can’t resist. Some sources report that sainfoin can attract 10 times more honey bees than white clover. And just like wine takes on unique tastes and properties depending on what type of grapes are used, honey takes on similar unique tastes and properties depending on what floral source it was produced from. Sainfoin honey is light gold in color with a very distinct, delicate flavor. Beekeepers with access to acres of sainfoin are truly privileged.

For farmers and ranchers, sainfoin has other properties that make it desirable in certain situations. Sainfoin is very drought tolerant and able to be grown in a dryland setting as long as there’s at least 12 inches of annual rainfall. Under dryland conditions, it’s capable of hay yields of 1.5 to 4 tons an acre. Nutrient content is similar to alfalfa. Sainfoin thrives in calcareous soils high in lime. It requires no fertilizer and has few pest problems, although it is susceptible to root and crown rot under irrigated conditions. When irrigated, sainfoin stands can live 3-6 years while dryland stands have been known to persist 20+ years.

Sainfoin is not for everyone, and does have some limitations. While first cut hay yields can be greater than those for alfalfa, it has poor regrowth. Typically sainfoin is cut once a season and is grazed the rest of the year. It also requires good drainage and won’t tolerate wet soils, flooding or high water tables. Acidic and saline soils are also a problem for sainfoin.

Look for sainfoin in our honey bee pasture blends. For folks interested in purchasing pure sainfoin seed, please contact us directly for prices and availability. To find out if sainfoin might be a good choice for you, contact your local Cooperative Extension Service or ask us.