Colorado Columbine: Our Most Popular Wildflower of 2015

Colorado Columbine: Our Most Popular Wildflower of 2015

In its fair Western home, may the columbine bloom, till our great mountain rivers run dry. – “Where the Columbines Grow” by A.J. Fynn

It’s hard to believe we’re at the end of another growing season. The flowers that once filled our landscapes with color and beauty have disappeared; their withered heads a reminder that, as Frost put it best, nothing gold can stay. Here at Nature’s Seed we like to use this slow down to take a closer look at the past year. Some of the most interesting data I look at comes from product reports, and it’s from these reports that I can identify trends and best-selling products. While I already had a good idea what our most popular wildflower was, the data confirmed it – Colorado columbine was the clear customer favorite. 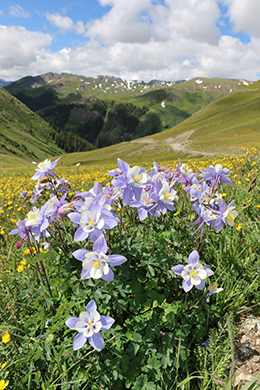 It’s easy to see why Colorado columbine (Aquilegia coerulea) is everybody’s favorite. Also known as Rocky Mountain columbine, this native perennial is exquisite in both form and color; traits characterized by uniquely spurred sepals of purple and blue peeking out from behind white inner petals. Long yellow stamens jut out from the center of the columbine, topping the flower like a golden crown. While Colorado columbine is grown and admired all over the country, it holds a special place in the hearts of Coloradoans where it’s honored as their state flower and given legal protection on public lands. In fact, their state flower was the inspiration for their state song – “Where the Columbines Grow” by A.J. Fynn. Finn’s inspiration for the song came while traveling through Colorado in 1896. During his journey, he was awestruck by the meadows full of blooming columbine; an experience that would leave a lasting impression. More than a decade later he would pen the words that would go on to become the state’s official song.

Aquilegia (derived from the Latin word for eagle) is a genus of wildflowers containing around 70 species, 1/3 being native to North America. Of the native columbines, Colorado columbine makes its home in the Rocky Mountains where it can be found growing in a broad range of habitats. Everything from dry rocky slopes to moist shady woodlands can be home for this columbine. Its adaptability has made it a common component of wildflower seed blends, and it can now be found in wildflower gardens far beyond its native range.

How to Grow Columbine From Seed

Like most columbines, the Colorado columbine is easy to grow and maintain. Select a spot that gets full-sun to part-shade with well-drained soil. Colorado columbine seeds benefit from a period of cold stratification, so it’s best to sow the seed in late fall where it can overwinter in the soil. Storing the seed in the refrigerator a few weeks before planting will also work. Sow the seeds directly on top of bare soil and press them in lightly using your foot. No need to bury them. Keep the soil constantly moist, but not soaking, during germination. This usually takes about 30 days. Also keep in mind that Colorado columbine won’t bloom until the second year, so be patent. 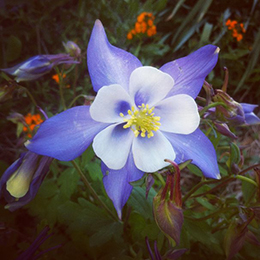 Once Colorado columbine has established it’s fairly drought tolerant. However, it will need to be watered more regularly during the driest parts of the year especially in full-sun conditions. Its natural bloom period is from April to July. Occasional deadheading will ensure continuous booms throughout this time, but will also keep it from self-seeding which may or may not be desired. Dividing columbines every two or three years will also keep them vigorous.

Please contact us for information and pricing for bulk amounts of Colorado columbine seed.