Communication Breakdown: There’s No Need to be Afraid of Scientific Names

Communication Breakdown: There’s No Need to be Afraid of Scientific Names

One of the very first courses I took in college was called “woody plant materials”. During this class, we were required to memorize dozens of landscaping plants and their names, both common and scientific. Like most people, I was very nervous about learning scientific names. It all looked like gibberish to me, but I reluctantly gave it a shot. Surprisingly, I caught on quickly and realized scientific names were nothing to be afraid of. While knowing the scientific names of every plant on campus might not impress members of the opposite sex (trust me, it didn’t work), it will give you an edge at the garden center or in conversations with fellow gardeners.

Every plant and animal on earth has a common name and a scientific name. Common names vary from region to region and from person to person. On the other hand, scientific names don’t vary and are recognized worldwide. For example, where I live gardeners regularly call a nasty vine weed “morning glory”. Yet in most areas of the country, “morning glory” is actually a common name for a group of ornamental flowering vines and not considered a weed. Do you see how this can be confusing? This is the reason we have scientific names. The weed that gardeners in my area are referring to is known as Convolvulus arvensis, while the ornamental flower called morning glory is called Ipomoea tricolor. Notice how this clears up any possible misunderstanding?

How to Use Scientific Names

When learning and using scientific names, you’re really learning a new language – Latin. While this ancient language is considered a dead language, it’s actually very much alive and used for science, law and ecclesiastical purposes. To read and write a scientific name, it’s important to understand the parts of the name and how they relate to plant taxonomy. The first part of the name is the plant genus, and is always capitalized. The second part of the name is the plant species. This part is always lower-case. The whole name should always be written in italics if possible, and no accent characters are used. If the plant is a particular variety or cultivar, this should follow the scientific name and be enclosed by single quotes. Varieties and cultivar names are not italicized. For example, the proper scientific name for our pasture-type tall fescue would be Festuca arundinacea ‘Fawn’. 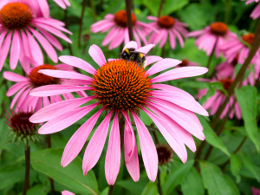 Sometimes a plant’s scientific name can give away clues to its physical characteristics or common name. Take perennial ryegrass for instance. Its scientific name is Lolium perenne. The word perenne is Latin for perennial, and they look and sound similar. Other scientific names are fairly easy to decipher, such as names that reference countries or states (americana, japonica, californica). Learning the Latin words for colors is beneficial since many scientific names include these words. For example, purpurea is Latin for purple and appears in Echinacea purpurea, Dalea purpurea and Digitalis purpurea. Without even knowing the common names of these wildflowers, you already know they’re purple.

Scientific names are great for pinpointing the exact plant you’re dealing with. They’re the quickest way to end any debate about plant identification. However, be aware that not everyone agrees on how to pronounce scientific names, and I’m not even going to touch that topic!