GM Kentucky Bluegrass: A Step in the Wrong Direction

GM Kentucky Bluegrass: A Step in the Wrong Direction

Genetically modified organism. A few decades ago you would be hard-pressed to find someone who understood what that meant. Today the term has become a loaded phrase, invoking a wide range of opinions and feelings ranging from the adamantly opposing to the eagerly promoting. On one side, GMO crops and plants are viewed as harmful, unpredictable, and threating. On the other they’re regarded as innovative, beneficial, and the future of agriculture. I’ve always been for the advancement of science and technology in the progress of the human race. At the same time, I’ve always felt it was our duty as humans to strive to be good stewards of the earth and ensure our existence has as little negative impact on the world as possible. While I can see valid points behind both sides of the debate, there’s one aspect I can already tell is a step in the wrong direction. Genetically modified Kentucky Bluegrass, currently being developed by the Scotts Miracle-Gro company, has disaster written all over it.

First, it’s important to define exactly what makes genetically modified Kentucky Bluegrass different from the type of Kentucky Bluegrass we provide at Nature’s Finest Seed. Our Kentucky Bluegrass seeds have been harvested from grass plants bred over many generations to bring out desirable traits. This is the same concept that determines what breed of dog one might have. By breeding grass plants that have the desired genetics (color, growth habit, drought tolerance, etc.), growers are able to produce elite-type turfgrass varieties. On the other hand, GM Kentucky Bluegrass is developed using genetic engineering techniques in which foreign DNA is inserted into plant cells, producing modified or novel genes. Genetic engineering has already led to the alteration of many plants and animals, including goats that produce spiderweb-like silk proteins in their milk and pigs that glow like jellyfish. 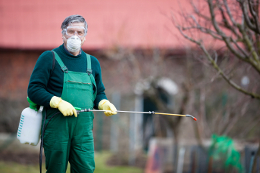 So why is the Scotts company so adamant about developing and releasing a GM Kentucky Bluegrass, and what’s the problem? With over 50,000 square miles of the continental United States covered in lawn (Kentucky Bluegrass making up a large percentage of that area) the turfgrass industry is a very hot item. Almost every homeowner has at least some lawn on their property, making the race to manufacture products to maintain these lawns very appealing and profitable. Scotts, always looking for new ways of pushing their line of lawn products, has partnered with the Monsanto Company for the last decade in producing a GM version of Kentucky Bluegrass resistant to Roundup, the most widely used herbicide in the United States.

Many people are familiar with Roundup and its ability to kill any plant it touches. While this non-selective herbicide is generally considered safe for small pin-point applications, large-scale use has been criticized for having harmful effects on soil quality, aquatic life, and for contributing to birth defects. Logically, the last thing homeowners should be doing is using more of this product, as well as other potentially hazardous chemicals on their lawns. Instead, Scotts and Monsanto have partnered to produce Kentucky Bluegrass that is resistant to Roundup. This provides a quick, easy way to eliminate weeds from your grass by simply dousing the whole lawn with Roundup, killing the weeds while the Bluegrass remains unharmed. This is exactly how Scotts and Monsanto are promoting their products, which sadly will appeal to many homeowners unaware of the negative consequences of this practice. Instead of leading the industry in a responsible direction, Scotts and Monsanto are derailing the cause of sustainable landscaping.

The Legal Implications and Threat to Non-GM Growers

It’s more than just the idea of chemical onslaught that is cause for concern, it also sets up a legal nightmare. In addition to our own field production, Nature’s Finest Seed uses an extensive network of trusted, independent growers. When Scotts releases their GM Kentucky Bluegrass, we will be directly impacted as well as our network of growers. This is because Kentucky Bluegrass pollen is easily spread by the wind and has a huge potential for cross-pollinating with existing stands. This will most assuredly lead to contamination of GM grasses with our non-GM types, affecting our ability to provide our customers with pure, non-GM Kentucky Bluegrass and ruining contractual obligations for committed non-GM growers. This was the concern that secretary of agriculture, Tom Vilsack, had when he wrote a letter to Scotts asking them to be sensitive to this issue. Only time will tell if Scotts paid any attention to his request. It also brings up the question of how a company would even go about preventing their pollen from spreading to other grasses in the first place.

To me, common sense dictates that instead of genetically engineering grass that encourages rampant chemical use and threatens producers of non-GM grass, why not focus on breeding grasses that are naturally more genetically superior? Grass grown from genetically superior, elite-type seeds produce healthier lawns which in turn will out-compete weeds, resulting in no herbicide use at all!