Killer of The ‘Ōhi‘a Tree, Scientists Say is Fungal

Killer of The ‘Ōhi‘a Tree, Scientists Say is Fungal

Do you have an ‘ōhi‘atree? Do you live in Hawaii? If so, you may want to keep a close eye on your tree, for the Agricultural Research Service (ARS) and university scientists have identified two new species of fungi as the killer of hundreds of thousands of the beloved Hawaii ‘Ōhi‘a trees.

Rapid 'Ōhi'a Death” (ROD) is a wilt disease. Up until now, the disease has been limited to the Big Island of Hawaii but is now in Kauai.

The ‘ōhi‘a tree is a native species to Hawaiian forests, and plays a critical role in the ecosystem. The tree helps maintain watershed health, groundwater quality, and provides a habitat for rare and endangered birds and insects.

Federal, state and other cooperators are researching tirelessly on how to contain and manage the disease.

The name of the disease; “Rapid 'Ōhi'a Death,” refers to the fact that once visible symptoms occur, the trees most likely only have a few weeks to live. With that being said, affected trees can actually have the fungi for months before any of the disease symptoms start showing.

According to the USDA, “scientific evidence originally pointed to an aberrant strain of the fungus Ceratocystis fimbriata, which also attacks sweet potato, including in Hawaii.” Lisa Keithis a plant pathologist with ARS’s Daniel K. Inouye U.S. Pacific Basin Agricultural Research Center in Hilo, Hawaii. She and “colleagues from the University of Pretoria, University of Hawaii and Iowa State University determined that two new species of Ceratocystis are actually to blame, which they have named C. lukuohia and C. huliohia.”

The report continued explaining the two diseases are “genetically distinct from each other. Both belong to geographic subgroups based in Latin America and Asia, suggesting they arrived in Hawaii with imports of vegetatively propagated plant material and then evolved specifically to infect ‘ōhi‘a.”

The report also included information on the two fungi; C. lukuohia is more aggressive for it “wages a systemic attack on the tree’s vascular system, obstructing water and nutrients and causing the canopy to rapidly die and turn brown. By contrast, C. huliohia inflicts cankers just below the tree’s bark, killing off localized sections of vascular tissue so that the tree dies more slowly.” 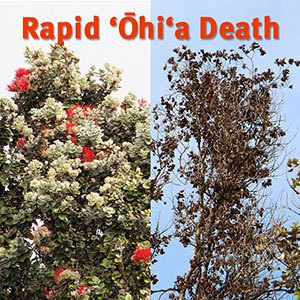 So, researchers are now trying to develop fast new methods of detecting the fungi. This will increase efforts to monitor the disease and prevent its spread to other Hawaiian Islands as well as other regions of the world.

Let’s get to growing,