Throughout history humans have always been fascinated by the iris. Its bold, sword-like petals have inspired many well-known symbols such as the fleur-de-lis, and artists all over the world have attempted to capture its beauty. Vincent van Gogh used the iris in many of his famous paintings, and even the word “iris” comes from the Greek word for rainbow. It’s no surprise we find the iris so alluring. Among flowers it’s quite distinctive and found growing on almost every continent. In North America there are around 30 species of irises alone, and it’s one of these native irises that I want to focus on this week. If you’re an avid hiker in the western United States, chances are you’ve spotted the Rocky Mountain Iris (Iris missouriensis) poking up through the grass along a stream, river, or lake shore. Although it only gets about a foot or two tall, its unique shape and in-your-face colors are hard to miss. In fact, it was the Rocky Mountain Iris’s flamboyant look that helped it to be discovered in the first place.

The Lewis and Clark Expedition

The year was 1806, and the Lewis and Clark expedition was on its return trip through Montana. Captain Meriwether Lewis and his partner William Clark had just split up for the first time during the expedition. Lewis wanted to further explore the upper reaches of the Marias River while Clark went south to the junction of the Beaverhead River and Horse Prairie Creek. It was during this exploration of the Marias River that Lewis stumbled upon the Rocky Mountain Iris. According to a July 6, 1806 journal entry, Lewis described spotting the iris growing among the peppergrass. He collected the specimen and labeled it “a pale blue species of flag (flag is a common name for some species of irises). Lewis’s original plant collection can still be seen today at the Academy of Natural Sciences in Philadelphia. But Lewis was far from the first person to appreciate the Rocky Mountain Iris. 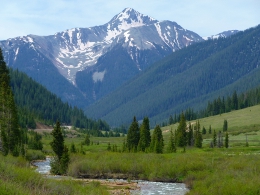 Centuries before the Lewis and Clark expedition, Native American Indian tribes had been using the Rocky Mountain Iris medicinally to treat all kinds of problems, most notably skin conditions. The roots of the plant contain chemicals that were used to induce vomiting but were also used to treat toothaches, gum sores, and other mouth problems. The leaves were often made into a tea that could be used to provide relief from kidney and bladder infections while other tribes mashed the roots into a salve and applied it to sore, achy joints. Even the fiber was useful. Rope was created from the fibers in the leaves and made into fishing nets, camping bags, and snares. While the Native Americans were experts in the medicinal uses of the Rocky Mountain Iris, caution is advised when handling and using this plant as it’s toxic and potentially harmful if not properly understood.

Nowadays Rocky Mountain Iris is a common wildflower used in native landscaping, especially in areas near water or in moist soils. It can be found in nurseries and garden centers but is easily grown from seed. It flowers heaviest in the springtime around May or June and can continue into early July. Perhaps the most striking attributes of this wildflower are the vivid colors which come in a wide range of blues, purples, pinks, and lavenders accentuated with yellow patches and purple veins. While it tolerates full sun, Rocky Mountain Iris does well in shady conditions. Unlike some wildflowers, the Rocky Mountain Iris is rhizomatous and spreads like grass. Over time it can form large clumps that can be divided and planted in other locations. Frequent division will keep the iris vigorous and healthy. 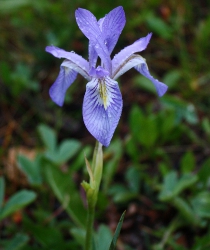 Rocky Mountain Iris makes a great addition to any wildflower bed and thrives almost anywhere in the West. Once established, seeds can be collected and planted from the large dried capsules. Iris seeds are best planted in the autumn in a sandy loam soil. Aside from frequent division, upkeep is minimal and consists mainly of removing the old leaves and cutting back the foliage when needed. Beware of the PCI borer, a common pest of the Rocky Mountain Iris. This borer is the juvenile form of a moth which lays its eggs on the Iris. Preventing the moth from laying eggs on the Iris will control the borer. If a PCI borer does manage to infest one of your iris plants, immediately dig the infected plant out and place it in a plastic bag. Dispose of the bag in a garbage can to avoid contaminating the other iris plants.