My Experience Using Sheep Fescue as an Alternative Lawn Grass

My Experience Using Sheep Fescue as an Alternative Lawn Grass

Working at a seed company has some neat benefits. For instance, getting to use my own yard as testing grounds for many of the products we sell here at Nature’s Seed. This comes in quite handy because, as a first-time home-owning millennial, of course I want my yard to be unique. That’s how my generation does things, right? But before I’m dismissed as just another special snowflake, keep in mind that breaking from tradition and doing your own thing isn’t always a bad idea. In fact in my situation it was one of the best choices I could have made since becoming a homeowner.

First, sheep fescue has nothing to do with sheep. I’m not sure how it got that name as it doesn’t seem like it would be good forage for sheep anyway. Sheep fescue, Festuca ovina, is a cool-season bunchgrass often lumped together in the same group with hard fescue, creeping red fescue and chewings fescue. Together, these fescues are referred to as “fine” fescue and all share similar traits; the main traits being their fine textures, shade tolerance and low, slow growth habits. Out of the fine fescues, sheep fescue is special in that it’s the most heat and drought tolerant and can stand up to the harshest conditions and temperature extremes. It’s also very adaptable. I’ve often referred to it as the Swiss Army knife of the fescues – fulfilling many roles and needs. It’s been used everywhere from ski slopes to campgrounds, and as an ornamental grass to a filler in flower gardens. And as the limits of traditional Kentucky bluegrass lawns are being felt throughout the West, many folks are taking a closer look at sheep fescue as an alternative turfgrass. 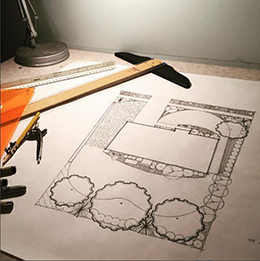 I purchased and moved into my home in the spring of 2015. My house sits on ¼ acre in a rural neighborhood in the high desert climate of Utah. It’s the driest place I’ve ever lived, averaging only 12 inches of precipitation per year. On the bright side, after conducting a soil survey I discovered my soil was well-drained loam with a “prime” farmland classification. Too bad the lack of available irrigation makes farming in that area extremely difficult; the only thing growing for miles around is sagebrush. Because the nearest town is several miles away our small neighborhood uses a private well for all its water needs. This makes water fairly expensive, and the last thing I want is to spend enormous amounts of money fighting to maintain a “traditional” landscape in the desert. It’s not uncommon for summertime water bills in my neighborhood to reach $250 or more a month, although the average is around $150. But why even pay that much? My water company charges a base rate of $38 per month. This base rate includes a connection fee and up to 10,000 gallons of water. Any additional water used after this 10,000 gallons and your bill starts to quickly climb. With this in mind, I made it my goal to keep my monthly water usage below 10,000 gallons.

Upon arriving at my new home the first priority was killing off the existing bluegrass. Not only was there too much, it was also thin, sickly, and full of weeds – a sad sight resulting from a lifetime of heat and drought stress. It needed to be put out of its misery. I opted to go with an application of glyphosate to ensure I killed the bluegrass and weeds down to the roots. While I respect everyone’s personal choice on the use of herbicides, and I understand there are other ways to remove turfgrass that don’t involve herbicide, using glyphosate was the best option in my situation. Other methods, such as using a sod remover, can leave roots in the soil that could grow back, and renting the equipment can be expensive and labor intensive. The same is true for tilling. Solarization and layering can work well for small areas, but these methods are not practical for large areas like I had. After the existing turf was totally dead, I used a string trimmer to scalp the lawn down to the soil followed by vigorous raking to remove as much of the dead grass as possible. This raking also roughened up the soil surface – a crucial step when establishing a new lawn. 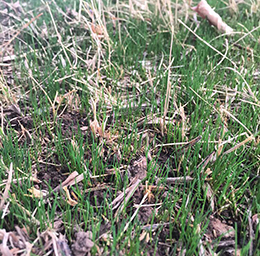 It was now nearing the end of August and time to start planting. Based on the landscape design plans I drew up, I would also be reducing the area of my front yard lawn from 2000 sq. ft. down to around 800 sq. ft. The rest of the area would be converted into water-wise garden beds full of perennial wildflowers, native shrubs and trees. As for my 5000 sq. ft. backyard, that’s going to be another project for another year. I decided to go with the ‘Azure’ variety of sheep fescue for its unique teal blue color. Other popular varieties include ‘Marco Polo’, ‘Covar’, and ‘Azay’. No matter the variety they all have the same basic characteristics: slow-growing, low nutrient needs, good shade tolerance, excellent cold hardiness, excellent drought and heat tolerance, and no known disease or pest problems. The seed was sown at a rate of 5 lbs./1000 sq. ft. and raked in. The soil was kept constantly moist during the germination period, which started around day 8 and was in full swing around day 12. By the beginning of October my sheep fescue lawn was fully established. From there it would go on to thicken up the following spring.


The Good, the Bad, and the Ugly

It’s now been over a year since planting my sheep fescue lawn. Overall, I’ve been very impressed. I mowed it twice this entire year, mostly to remove some dandelion heads that took advantage of the slow-growing fescue to sneak in. That’s one downside of such a slow-growing lawn; it can let some of the quicker growing weeds in. Luckily, since reducing the size of my lawn considerably it wasn’t a big deal to get out and do some old fashion hand weeding. I did end up using a broadleaf herbicide on a small patch of bindweed that started creeping in. I didn’t fertilize at all this year since doing so would have probably favored the weeds more than the grass. As the lawn continues to thicken I'm sure it will do a better job of keeping the weeds out.

What gave me the most joy was its water-efficiency. Watering 2-3 times a month (as opposed to 2-3 times a week for bluegrass) was enough to keep it green during the summer months. However, there was a strip of lawn along the east side of my house that burnt up completely. The combination of reflected heat off the side of the house along with the inefficacy of the sprinklers in that area was just too much for the sheep fescue. Next year I plan to install a flagstone path in this area, so that will solve the problem. Also, sheep fescue is a bunchgrass and doesn’t spread the same way bluegrass does. This can be a good thing since I didn’t need to add any sort of barrier between my lawn and my garden beds. But it does mean that I’ll need to overseed often to make sure the lawn remains as thick as possible. I’m not sure if I’ll have to do this every year, but I might. Again, since reducing the size of my lawn this shouldn’t be a big deal.

How Did I Do With Water Usage? 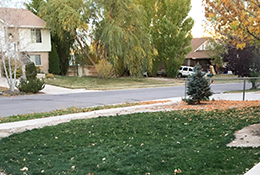 This year I used an average of around 6,500 gallons of water a month. Keep in mind this is an average from May to October. In spring and fall I was using less, in the summer I was using more. I also planted several trees and shrubs over the summer and was watering them almost daily to help them establish. In September I planted a portion of my backyard in tall fescue (another type of fescue I’ll have to explain later) and was also watering that almost daily. Overall, I feel like I did pretty good considering the new landscaping I installed. For comparison, it was reported that the average Utahn uses 248 gallons of water a day. That would mean close to 15,000 gallons a month for my household. It will be interesting to see what the coming years hold especially as my landscape matures, the roots of my plants grow deeper and become more water efficient, and as I install some rainwater harvesting equipment.

What You Should Know Before Switching to Sheep Fescue

I definitely encourage the use of sheep fescue for those looking to save water, money and time. But before you consider trading out your bluegrass lawn for sheep fescue there are a few things to be aware of. Like I’ve mentioned, sheep fescue lawns behave differently than traditional bluegrass lawns. They can form a slightly clumpy look, especially if left unmowed. Regular mowing will smooth this out and make it less noticeable, but I actually don’t mind the more natural look. Sheep fescue also doesn’t hold up as well under heavy traffic as bluegrass. I probably wouldn’t recommend it for an area that is frequently used by kids or dogs. But if you want something that keeps a really nice color with minimal water, only needs to be mowed a couple times a year, won’t invade or spread beyond where you plant it and has no disease or pest problems, then I highly recommend sheep fescue as an alternative to traditional bluegrass lawns.