The Benefits of Management-Intensive Grazing on the Environment, Livestock, and Pasture Grass

The Benefits of Management-Intensive Grazing on the Environment, Livestock, and Pasture Grass

Ever since mankind first figured out how to control large groups of animals, we have experimented with different ways in keeping them fed. In the wild, animals often form herds that are constantly moving around to new sources of forage. Because vegetation would quickly disappear under such heavy grazing, herds would not stay in one area for very long and would soon be on their way. But with the arrival of man and his methods of controlling herds with fences and barriers, this natural grazing process was altered. Instead of being allowed to move freely from one place to another, animal herds were now forced to occupy one area for long periods of time. This eventually led to overgrazing, loss of vegetation and natural forage, soil erosion, and the need for supplemental feed to be brought to the herd. Fast forward to present day and not much has changed. Traditional livestock management techniques still have many animals confined to one area surrounded by fences where feed is grown in separate fields, harvested, and brought to the animals day after day. It’s only been within the last few decades that modern livestock producers have started questioning this longstanding practice and have developed a technique that mimics the natural grazing conditions found in the wild. This technique is known as management-intensive grazing (MIG) which blends science, agriculture, and practicality together into an environmentally friendly way of livestock management while promising to lower costs and increase productivity. 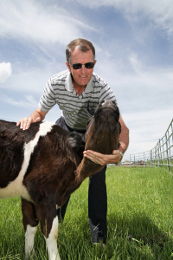 Also known as rotational grazing, MIG can be described as a system of grazing in which a pasture is divided into sections called “paddocks”. This dividing of a pasture into paddocks is usually accomplished by some kind of movable fencing or electric wire that can be easily relocated. Animals are allowed to graze only one paddock at a time. After the animals have grazed on the forage in that individual paddock for a time they are then moved, or rotated, onto the next paddock. This cycle of rotating livestock from one paddock to the next helps to eliminate overgrazing and allows other paddocks to rest and recover.

Allows Grass to Regrow and Renew

This resting and recovering time for the pasture grass is the key to MIG systems. A resting period allows vegetation to renew energy reserves, something that happens naturally in the wild. With traditional grazing methods there is no resting period. This results in overgrazing in which livestock often eat the grass all the way down to the soil surface. This can stunt pasture grass growth, and over time will completely kill the grass plant. Grass that is able to regrow and rebuild shoot and root systems is able to produce its maximum biomass levels. Pasture yield is increased and the distribution of the forage is improved. This provides a renewable, sustainable supply of fresh forage for grazing animals and eliminates the need for supplemental feed.

Not only do MIG systems benefit pasture grass, but the animals themselves are benefited as well. Because of the frequent handling and constant rotation of livestock from paddock to paddock, herds tend to become more docile and easier to manipulate. Sick animals are easier to detect, and the general health of the herd improves. Since manure is spread evenly throughout the pasture instead of accumulating in one place, flies and internal parasites are reduced. Some studies have shown that the use of MIG systems even eliminate the need for de-wormers. 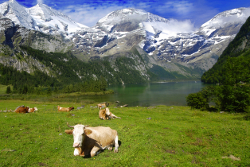 The environmental benefits of MIG are another major consideration. With the increased forage production and biomass levels, runoff water becomes cleaner and waterway pollution is reduced. This is the result of the natural “filter” effect that grasses and root systems have on water runoff. Increased vegetation cover also slows soil erosion and increases the amount of organic matter content in the soil. MIG systems are a great way to control livestock access to waterways and banks along rivers, streams, canals, lakes, and ponds. This can help protect and improve riparian habitat while limiting the amount of waste and erosion added to these waterways.

The benefits of management-intensive grazing are numerous. Whether it’s increasing forage yields and pasture grass production, improving overall livestock and herd health, or doing your part to protect the environment, a MIG system is smart, fresh, efficient approach to an ancient agricultural dilemma. Shouldn’t we stop doing things the way they’ve always been done and start doing things the way they should best be done?