The Benefits of Raising Animals and Livestock on Pasture Grass

The Benefits of Raising Animals and Livestock on Pasture Grass

Think back to the last time you ate a delicious, juicy steak. As you sunk your teeth into that meaty goodness, what kind of thoughts were running through your mind? If you’re anything like me, you were probably nearing total meat-inebriation and had little on your mind other than the next bite. Chances are the last thing you were thinking about was how that animal had been raised during its life; let alone what it had been fed. Unfortunately, the disconnect between ourselves and our food has become very prominent during the past several decades as more and more people have lost touch with the land, the animals, and agriculture in general. Farming has shifted from a traditional, family-owned and operated business into the more familiar mass-production model. While it’s important that food be produced on a large scale, it’s also important that we don’t lose sight of the old, tried-and-true methods.

One such tried-and-true method has been making a big comeback in recent years. Within the last decade, the practice of raising animals and livestock completely on pasture grass has become popular among ranchers and beef farmers. In fact, the Mexican restaurant chain Chipotle made the news this last week when they announced they will now be sourcing sour cream from 100%-pasture raised cows. You might be asking, what exactly is the significance of 100%-pasture raised cows? While most animals are raised from birth on grass, they often finish their lives eating grain. Most beef produced nowadays has spent the last 90 to 160 days in a feedlot; fattened on grain, corn, soy, and other supplements and fillers. Why? It’s simply more profitable and faster to feed animals like this, as well as enabling producers to grow their animals much faster and bigger. So what’s the big deal? Meat is meat right? To understand the significance of grass-fed beef over grain-fed beef, let’s look at the relationship between the cow and its feed.

Designed For Eating Grass, Not Grain 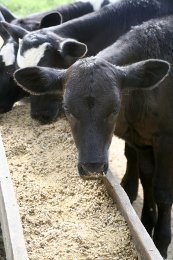 Cows, sheep, and other cud-chewing animals (known as ruminants) possess something called a rumen. A rumen is basically an organ inside the animal that acts as a fermentation tank. Its job is to convert cellulose into fats and proteins. Ruminants have evolved to eat grass, and thanks to this special adaptation it’s no problem for them to digest large amounts of it. The problem arises when they’re taken off this natural grass diet and fed a diet high in grains and starch. Unable to handle the change, the health of the animal begins to decline and can lead to bloating and a condition known as “subacute acidosis.” This condition can be painful for the animal and causes them to kick at their bellies, stop feeding, and to eat dirt. To prevent this, feedlot animals are given chemical additives and kept on antibiotics. Subacute acidosis has been found to cost the cattle industry between $500 million and $1 billion a year. On the other hand, grass-fed animals raised entirely on well-managed, high quality pastures require no chemicals or vaccines to prevent these types of conditions.

Not only is a grass-fed diet ideal for animal health, eating the meat of a grass-fed animal is more beneficial to human health. Grass-fed meat tends to be much leaner and lower in fat than grain-fed meat, as well as containing less saturated fat, calories, and cholesterol. It also contains higher levels of beta-carotene, vitamin C and E, and omega-3 fatty acids. These omega-3 fatty acids are particular beneficial to human health and encourage a healthy vascular and nervous system. Studies have shown these types of fatty acids may also reduce the risk of cancer. Compared to the meat of feedlot animals, animals raised on pasture grass contain 50%+ more omega-3 fatty acids than grain-fed animals.

Easier on the Environment 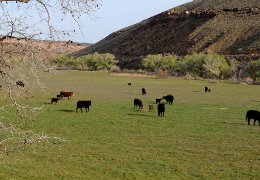 There are also environmental benefits from raising and finishing animals on pasture grass. Feedlots are breeding grounds for diseases, and with the constant feeding of antibiotics to these animals the development of new drug resistant bacteria and superbugs is a real possibility. Feedlots also contribute to water pollution if waste buildup is not dealt with properly. On top of this, feedlots account for a large amount of fossil fuel use. Producing the grains and corn used for feed requires fertilizers, which takes fuel to produce. On the other hand, pastures produce all the grass the animals need right there onsite. Animal waste is spread out more evenly across the pasture and acts as a natural fertilizer. Management-intensive grazing takes the process a step further by rotating the animals around the pasture to further benefit pasture grass health.

But perhaps the most conclusive proof that grass-fed animals are easier on the environment than feedlot animals comes from a study conducted by the USDA. The study concluded that 100%-grass fed cows produce fewer greenhouse-gas emissions and other pollutants, as well as reducing fuel use.

There are many reasons why raising animals totally on pasture grass is a smart idea. Whether you’re looking to start a large-scale ranching operation or just considering raising a few animals for a hobby or personal food supply, pastures offer an ideal setting. They ensure the highest level of animal health, meat quality, and environmental friendliness. Here at Nature’s Finest Seed, we have been providing high quality pasture grass blends for over 20 years. These blends have been customized specifically for your region and provide animals with highly palatable, nutrient rich forage.

So the next time you sit down for a steak or burger, consider the story behind the meat. Knowing how it was raised and what it was fed will enable and empower us as consumers to make wiser food choices.