Tall fescue is one of the most versatile, widely-used pasture forages in America. Purdue University estimates that over 35 million acres of tall fescue are grown in the United States. Its tolerance to temperature extremes, poor soil conditions, excessive moisture and drought are well-known. Tall fescue is also high yielding forage, often producing 2-4 tons of dry matter per acre. With all these attributes, it may seem tall fescue would be an excellent choice for a pasture. And it is…except when it isn’t.

What do I mean by that? First, some background. One of the oldest and most commonly used tall fescue varieties, ‘KY-31’, was first released back in the 1940s and quickly spread across the nation. Its drought and heat tolerance became legendary. It was very easy to establish and would grow almost anywhere under harsh conditions – all with little to no management required. However, ‘KY-31’ had a little secret behind its success. Hidden deep within the plant’s intercellular spaces lurked an endophytic fungus known as Acremonium coenophialum. This fungus gave the tall fescue added vigor, hardiness and contributed to the overall tough nature of the grass. Unfortunately, these same endophytes were detrimental to the health of livestock, especially horses. Cattle that fed on ‘KY-31’ showed symptoms of elevated body temperature, high respiration rate, reduction in weight and milk production, conception problems, and rough hair coats. In horses, mares who grazed the endophyte-infected tall fescue suffered major reproductive problems. 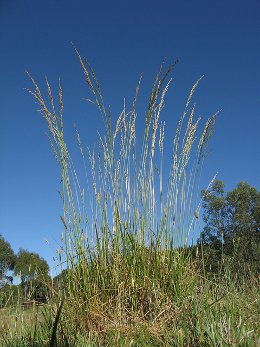 Today, our understanding of endophytes has greatly increased. Newer varieties of tall fescue have been developed, such as ‘Fawn’, that are considered endophyte-free. Here at Nature’s Seed, all the tall fescue we use in our pasture blends is endophyte-free and perfectly safe for livestock grazing. On the other hand, the turf-type tall fescue intended for lawn use does contain endophytes. In this case, we can take advantage of the added vigor the fungus provides to the grass. 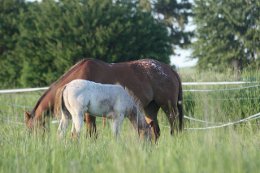 If you know your tall fescue pasture contains endophytes, there are some things you can do to minimize harm. Diluting the concentration of infected pasture by planting endophyte-free tall fescue, legumes or other forages will help. However, for heavily infested stands eradication is the best method. This includes killing off the existing tall fescue stand with herbicides or removing it with tillage. Currently, there are no fungicides that can be applied to infected tall fescue to reduce the presence of endophytes.

It’s important to understand that endophytes are transmitted through seed only. The fungus will not move from an infected plant to a non-infected plant next to it. Because of this, it’s possible to dilute stands of endophyte-infected tall fescue over time. If you suspect your animals may be suffering from tall fescue toxicity, remove them from the pasture and contact your veterinarian