Bison Gaining Popularity in the Pasture & on the Plate

Bison Gaining Popularity in the Pasture & on the Plate

They might look like giant walking shag carpets, but they sure do taste good. The American bison, or buffalo as they’re commonly called, is quickly becoming the meat of choice for many Americans. When compared to beef, health-conscious individuals find the lower fat and cholesterol levels appealing, as well as the higher amounts of vitamin B-12 and protein. Bison is commonly marketed as a healthier alternative to traditional red meats while still retaining a delicious, beefy taste. With an increasing demand for American buffalo, there has never been a better time to become involved in the bison industry. In fact, the National Bison Association reports that the buffalo business entered 2014 in a position of unparalleled strength, stability and profitability.

Back from the Brink

At one time bison dominated the grasslands of North America with numbers in the tens of millions. Unfortunately, they were hunted to near extinction by the late 1880s. Today the American bison population is estimated to be close to half a million, with the most famous herd found at Yellowstone National Park. Like cattle, bison are ruminants and spend their day grazing on grasses and sedges. Before the introduction of non-native forages, the primary diet of the American bison was warm-season native grasses such as the appropriately named buffalograss. 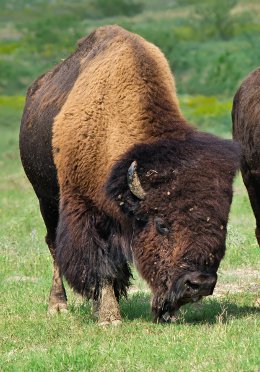 For producers thinking about raising bison today, there are a few things to know when planning a grazing system. While similar to a cow, a buffalo does have some unique grazing characteristics. First, bison are more efficient at digesting lower quality forages than beef cattle. This can be a benefit to producers who, for whatever reason, may not have the means of providing higher quality forages needed to sustain cattle.

Unlike cattle, there appears to be no bloat risk when grazing bison on large amounts of alfalfa, and there have been no documented cases of bloat. This unique adaptation lets producers take advantage of the nitrogen fixing ability of alfalfa, as well as the nutritional benefits of the legume. According to the Saskatchewan Ministry of Agriculture, the optimum ratio of alfalfa to grass for a bison pasture is 30 percent alfalfa and 70 percent grass. Here at Nature’s Seed, we’ve applied this recommendation to our Bison Forage Blends. Our bison blends contain this generous amount of alfalfa as well as high-yielding, palatable forage grasses selected specifically for each region in the United States. 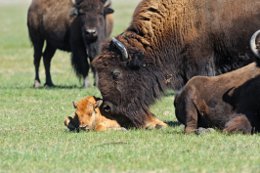 After establishing a bison-specific pasture, be sure to have a good rotational grazing system in place. In the wild, bison are constantly in a state of migration, sometimes even grazing while walking to a new area. Failing to accommodate for this natural instinct will lead to overgrazing. This can stunt pasture forage growth, and over time will completely kill off the forage. For more information on management-intensive grazing, refer to this article.