The Growing Popularity of Grass Driveways

The Growing Popularity of Grass Driveways

Just because we’ve done something a particular way for hundreds of years, does it mean it’s the best way? With the growing concern for the environment and the impact humans have on it, it’s only natural that some of our long held cultural “norms” are now starting to be challenged. One such cultural norm is the idea of paving over the ground when designing and installing parking lots, driveways, sidewalks, and other areas meant to handle medium to high traffic demands. Granted, in many situations this practice is the most practical, safest, and easiest way of keeping high-traffic areas clean and functional. Paving technology has come a long way from its humble beginnings as cobblestone streets in Europe meant to cut back on the amount of dust and mud created from horse drawn carriages. But along with the invention of modern day paving methods and materials, several new problems have arisen. One solution to some of these problems that solid asphalt, concrete, and cement driveways and parking lots cause might be found in the growing trend of grass driveway technology. 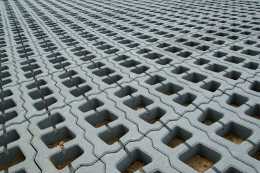 Grass driveway technology is an idea that goes by many names. Permeable pavement, drivable grass, lawn grid, and eco-driveways are all some of the terms to describe the idea behind a drivable surface that not only functions like a traditional paved surface, but retains the natural aspects of an unpaved surface as well. To accomplish this, several new technologies have been developed that incorporate a “geo-grid” type of plastic material that allows grass to grow in high traffic areas while at the same time protecting the root zone from compaction. We all know what happens to grass when driven on repeatedly over time. It stops growing in that area. With this new technology, grass is able to survive and thrive even while constantly being driven on. While this technology works great for driveways, parking lots, and sidewalks, it is not yet durable enough to be used in areas like busy roads and highways.

So what exactly are some of the problems that asphalt, concrete, and cement surfaces are causing? First, these solid surfaces are not permeable, meaning they don’t allow for the natural process of water absorption into the ground. This means that any water that comes in contact with these solid, paved surfaces is going to form runoff which will travel down gutters and stormwater drains. This stormwater runoff collects chemicals and garbage along its way, and is a major source of pollution to rivers, lakes, and streams. By installing a grass driveway, the water can be absorbed into the ground where roots and microbes can filter much of the pollution before it reaches waterways and aquifers. This natural absorption process also helps to conserve water that would otherwise be wasted. 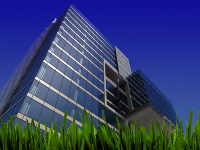 Grass driveways also help reduce heat in urban areas. Have you ever tried to walk barefoot across hot pavement during the summer? More than likely you ran as fast as you could across the scorching asphalt until you found some cool grass to jump to. Urban areas are often several degrees warmer than the surrounding countryside since pavement tends to store heat while grass has a cooling effect. By replacing asphalt and concrete, it’s possible to cut down on cooling costs and carbon emissions, not to mention making cities more comfortable to inhabit.

Other benefits of installing grass driveways, parking lots, and sidewalks include a reduction in erosion and the improved health of nearby plants. Surfaces covered in concrete do little stop the erosion of soils under them, which can be seen in the example of a washed out road. On the other hand, the roots from the grass in permeable pavement help to reduce erosion by holding soils together. Nearby trees, shrubs, and other plants benefit from the increased air and water movement into the soil, helping them grow and increasing their chances of survival.

While permeable pavement is a great alternative surface cover in many situations, it should not be used where there is a chance of chemical spills. Also, while these surfaces do well in winter conditions, salt and sand should not be used since these substances will eventually kill off the grass. When deciding on a grass to partner with your eco-friendly driveway, select a grass that has a high-traffic tolerance and will recover and spread quickly from damage and wear. For northern states, Kentucky Bluegrass Seed Blends are the best choice, while Bermudagrass Seed Blends work best in the south. With increased publicity and new technologies being developed, the future looks bright for grass driveways.